10 Must-See Places When Sailing in Croatia

How does an area with turquoise waters, verdant forests, untouched islands, dramatic cliffs, and fairytale towns sound? The good news is such a place actually exists, and it’s called Croatia. This gem of a country sits on the coast of the Adriatic Sea and offers plenty of amazing areas to explore, on land and sea. With a rich past and unparalleled natural beauty, Croatia offers plenty of reasons to visit. The people are friendly, the food is delicious, and many spots aren’t yet on the tourist radar. Cities like Dubrovnik and Split offer vibrant nightlife scenes, including beach bars, nightclubs, and festivals. You can find something to do at pretty much any hour of the day. 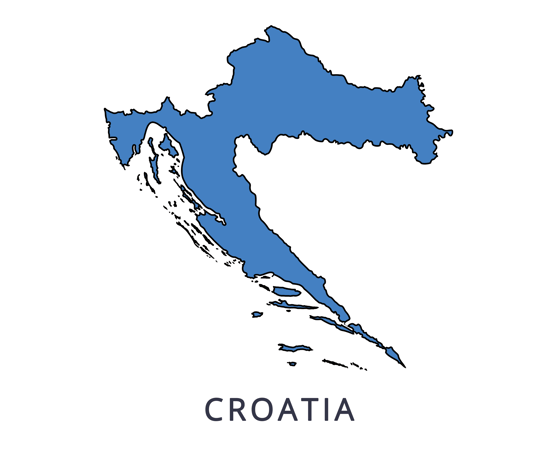 Since Croatia has plenty of coastline, it’s also one of the world’s best destinations for sailing, whether you’re a novice or a pro. You’ll find beautiful islands, tranquil bays, and unique wildlife, and you’ll realize that photos simply just don’t do it justice. For centuries, many of Croatia’s islands were only accessible by boat, so sailing affords you the chance to discover the area in the most authentic way. Watercraft have surely changed over the years, but Croatia’s timeless beauty and charm remain.

Click here to listen to some Q&A on Croatia

Before you pull up the anchor, check out our 10 favorite places to see when sailing in Croatia so you don’t miss a thing.

Croatia’s second-largest city is where most sailing trips begin and end. It might be tempting to fly into Split right before your trip and fly right back out afterward, but this historic city certainly deserves a few days of sightseeing. The city itself is hundreds of years old, and at the center stands the 4th-century Diocletian’s Palace, which is now a UNESCO World Heritage Site. We love Split’s narrow streets and quaint buildings, which remind us that the city was designed for people and horses, not cars, and street performers give it lots of charm. It’s the perfect place to learn about Croatia’s culture and past before setting sail.

Arguably Croatia’s most famous landmark is Krka National Park, known for outrageously scenic waterfalls. Krka is within driving distance of Zadar and Split, but we prefer to get there by boat. Sail past the town of Šibenik to the fairytale-style village of Skradin, where you can dock or drop anchor and spend a few hours wandering around town. Or, skip right to the good stuff and hop on a bus to Krka. 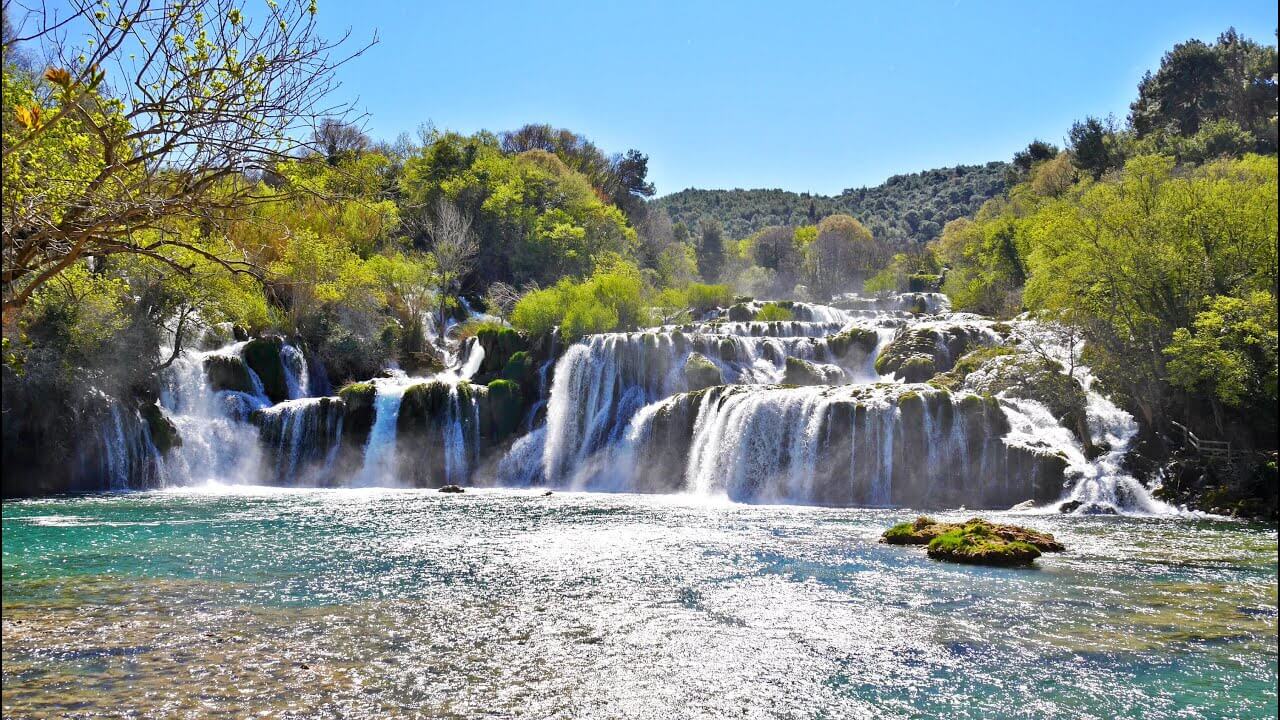 Krka’s wild landscape is characterized by lush trees, bright colors, and calm waters. Chances are you’ll try to capture its beauty in a photo, but it’s the kind of place that you need to see to believe it. For a bit of history, head to the island of Visovac in the middle of the Krka River, which houses a monastery dating back to 1455. The monastery, in addition to offering spectacular views, was used as a hiding place for books during periods of unrest throughout Croatia’s history, so it’s as important as it is beautiful.

About 30km off the coast of Zadar lies Dugi Otok, translated as the “long island” due to its long, skinny shape. The entire island is beautiful, but perhaps the most gorgeous area can be found on the southern end of the island: Telašćica National Park. Drop anchor in a nearby bay and take a walk to Telašćica’s stunning salt lake for an out-of-this-world view. Then, walk back to the western side of the island (toward the ocean), where the cliffs are perfect for epic cliff jumping. 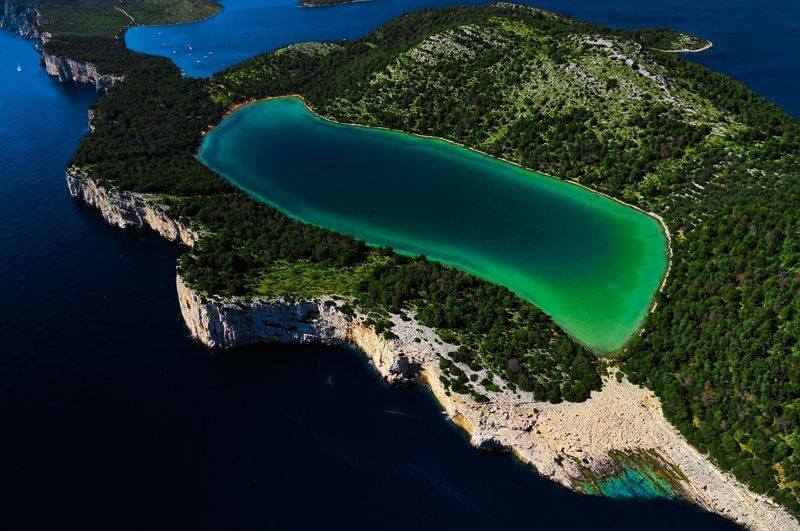 Searching for a beach? Don’t miss Sakarun Beach on the north side of Dugi Otok. This stretch of sand is one of Croatia’s most famous beaches. High-quality sandy beaches are hard to come by in the Mediterranean, which makes this one even more special. The water at Sakarun Beach is also incredibly shallow - it’s only 3m deep up to 300m from shore - so you’ll definitely want to swim or snorkel. The perimeter of the beach features tall pine trees, which provide both nice scenery and refreshing shade in the summer. Add in the classic views of boats anchored in the distance and you really can’t beat this spot.

We could spend hours retelling the storied past of the island of Vis, but the stories only come to life when you see the island in person. It’s an essential component of any Croatia sailing trip, and not only because of the magnificent caves and pristine beaches - though Silver Moon Beach and Stoncica should absolutely be on your Croatia bucket list. 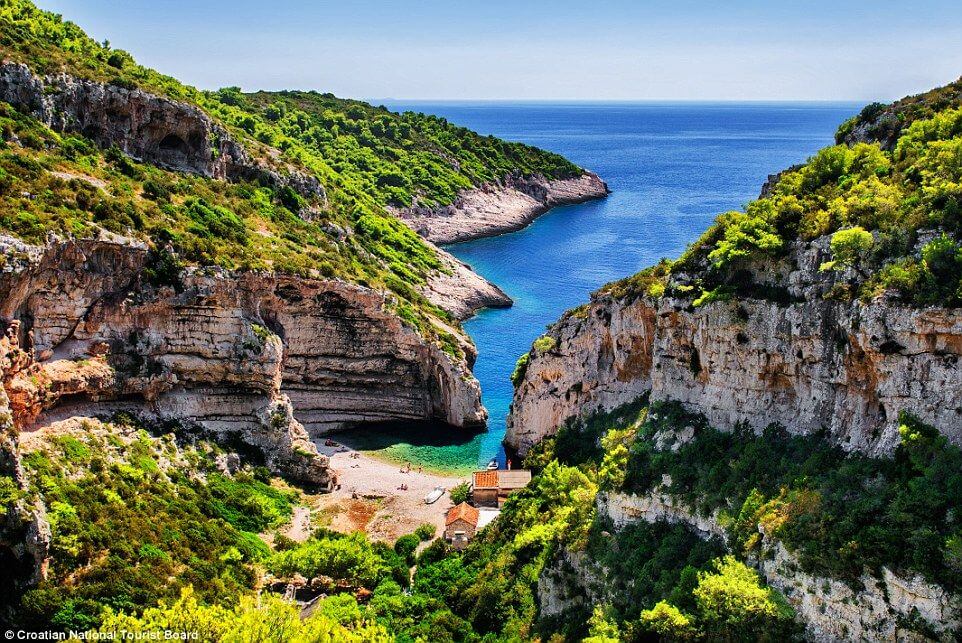 Vis didn’t just gain fame as the filming location of 2018’s Mamma Mia 2; it goes back way further than that. It’s been inhabited since at least the 4th century BC, and until the 1700s it was under Roman, and later Italian, rule. From the late 18th century onward, governance was passed between Italy, Austria, and finally Yugoslavia in 1920. Vis was the site of a secret Allied air base during World War II, and its prime location near the rest of Western Europe may have been instrumental in the Allies’ success. After the war ended, Yugoslavia’s dictator closed Vis to the public until only recently, so today it’s relatively untouched by tourism. In short, it’s a classic stop on any Croatia itinerary, even if you’re not a history buff, so be sure to check this one out. 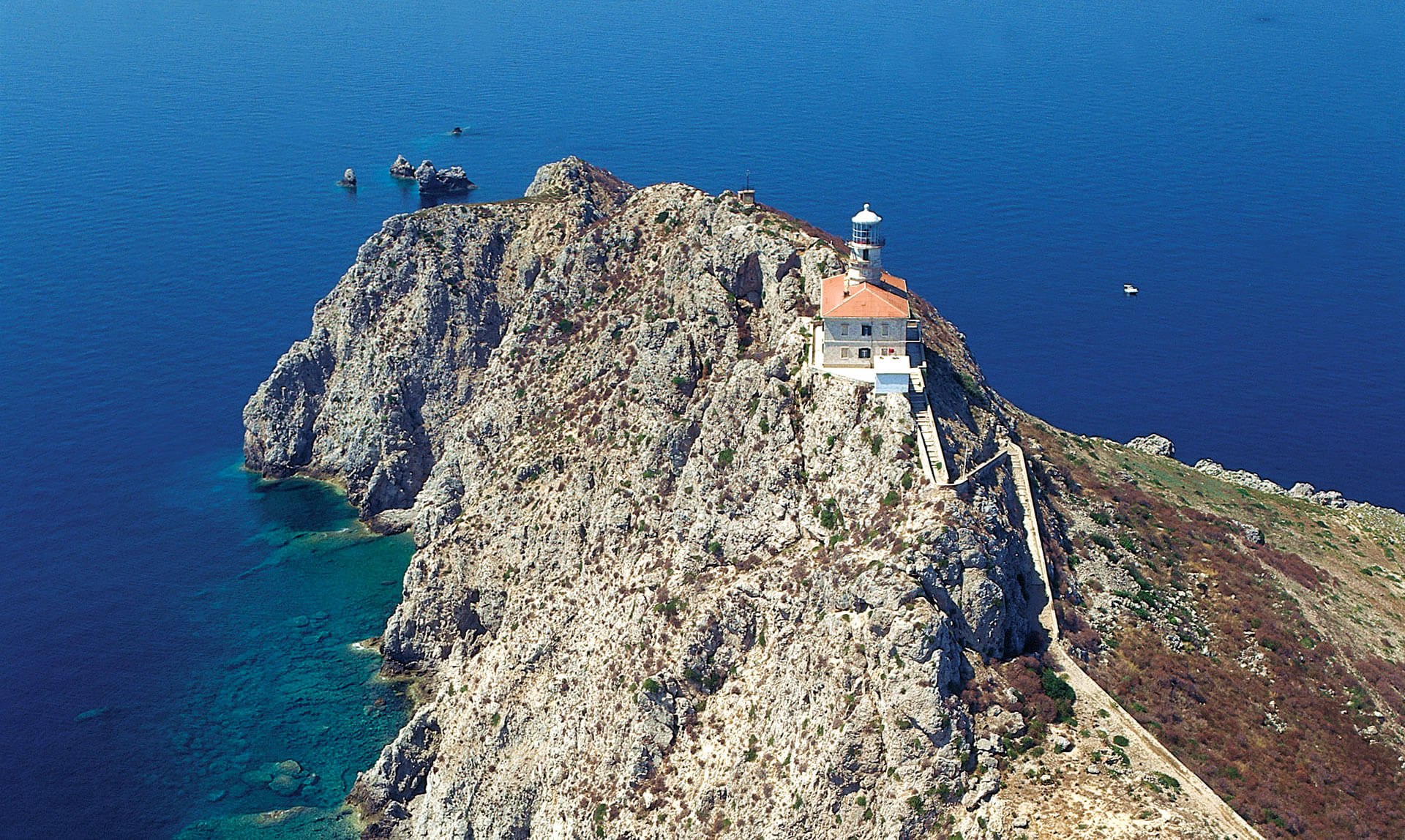 Feeling adventurous? Set your direction toward Palagruža, one of Croatia’s most untouched islands. It’s located halfway between mainland Croatia and Italy, so it takes a nice long sail to reach it. You’ll know you’ve arrived when you see Palagruža’s lighthouse atop towering cliffs jutting up from the azure water. Anchor in one of the two bays and revel in the feeling of being one of the few people on the island. Your only neighbors will be the lighthouse staff, perhaps a few other adventurous sailors, and definitely no Starbucks or McDonalds, which is why we love it. 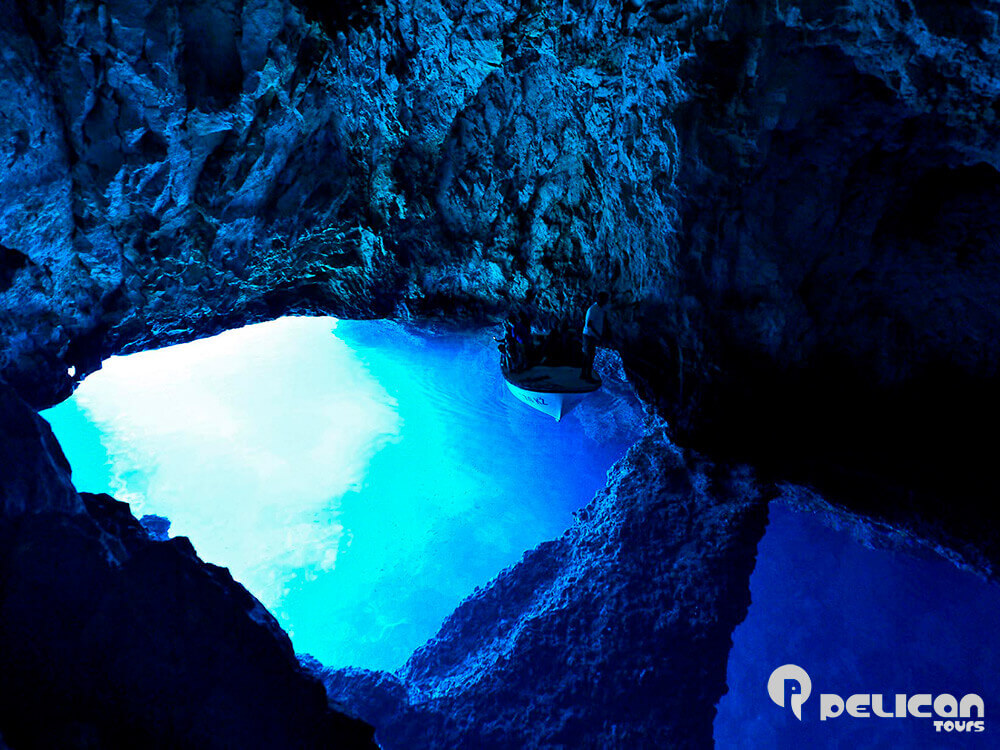 On the tiny island of Biševo is one of Croatia’s incredible natural wonders. But what makes the Blue Caves especially unique is that the site looks perfectly ordinary (by Croatian standards) as you sail toward it. To fully appreciate the Blue Caves’ beauty, you need to head into the grotto-like opening via a special tour boat, and only then will you feel like you’ve entered a portal to a different world. Though you really have to see it to believe it, the caves feature an opening underneath the water so sunlight streams in, illuminating the water in a magical way. No matter how often you come here, it’s mesmerizing every time.

Looking for the vibe of Monte Carlo or Mykonos without the sky-high price tag? Enter Hvar, Croatia’s glitzy, glamorous isle. Like its island neighbors, Hvar brings the historic charm, and it also features a bay full of opulent superyachts, chic sunset bars, and a DJ-spun soundtrack. If you’re in the mood to party in style, Hvar is your spot. Sometimes the waters directly off Hvar get congested, so if it looks busy, dock your boat in Palmizana to the south and catch a water taxi to Hvar Town. 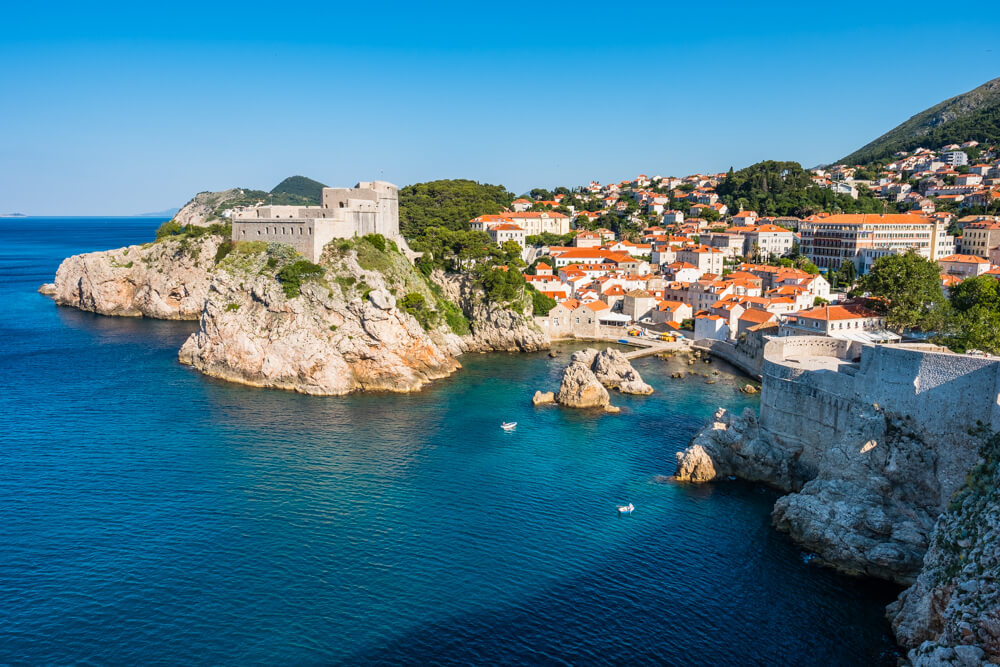 Although Game of Thrones made Dubrovnik a world-famous destination, it has always been a highlight of Croatia’s southern coast. The entire town is a UNESCO World Heritage site, and the center is encircled by impressive stone walls dating back to the 16th century. Within the walls you can find charming cafes, dazzling architecture, and, during the height of summer, lots of tourists. Here’s a tip: if you see a cruise ship docked in Dubrovnik’s harbor, you might want to come back another day. Or, go off the beaten limestone path and explore the vineyards and olive groves of Dubrovnik’s countryside. It’s busy for a reason, but you’ll want to experience this lovely town without the crowds. 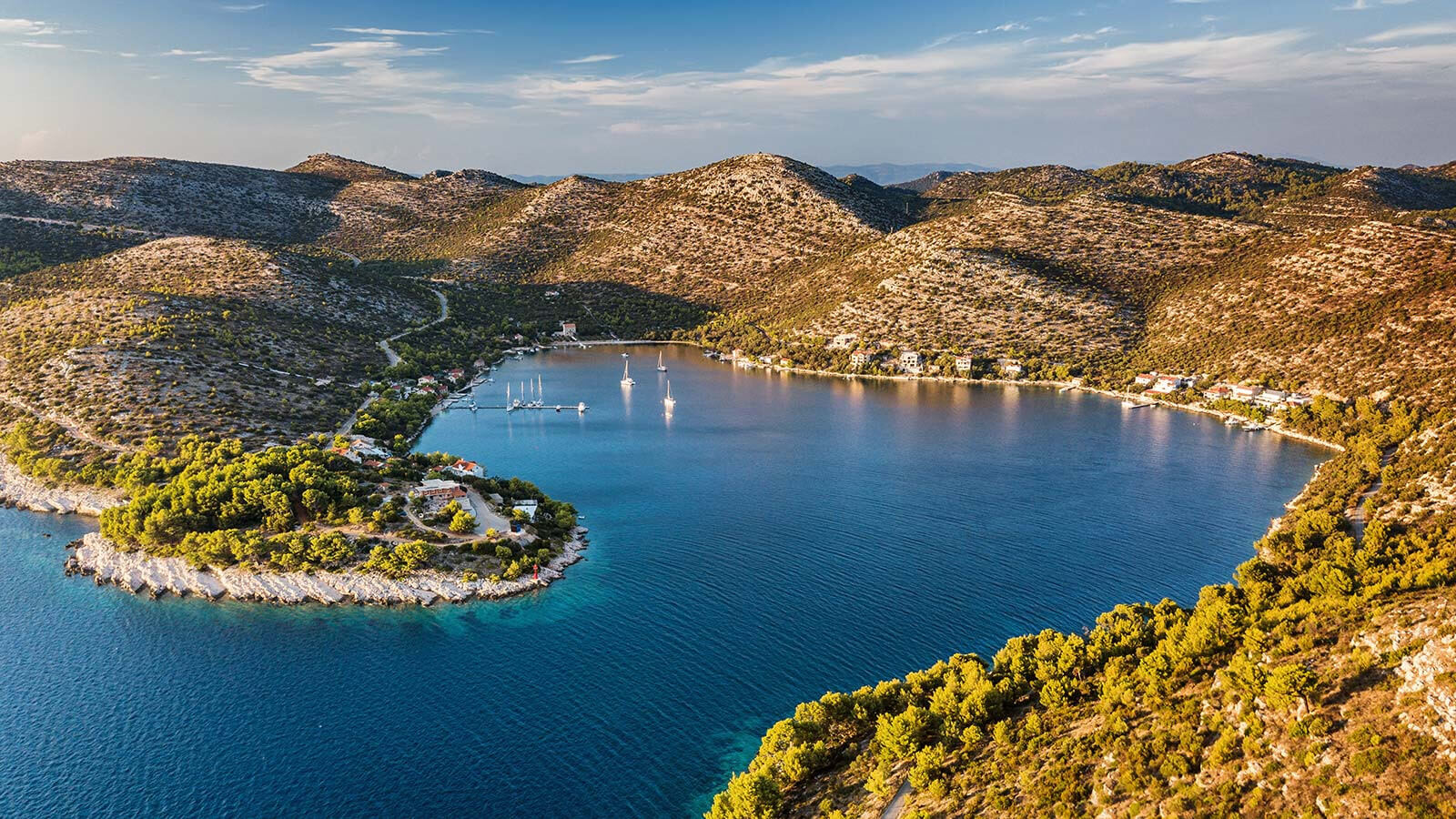 This remote archipelago of 46 islands is Croatia’s most isolated populated group of islands, and it’s home to only 800 people. It’s off the beaten track, so only make the trek out here if you want to be awed by fjord-like formations, endemic plants and animals that only exist here, and a pitch-black sky that’s ideal for stargazing. Despite its far-flung location, Lastovo is a favorite getaway destination for Croatians, who flock to the islands for summertime festivals that celebrate the night sky. It’s a fantastic way to top off a Croatian sailing adventure. 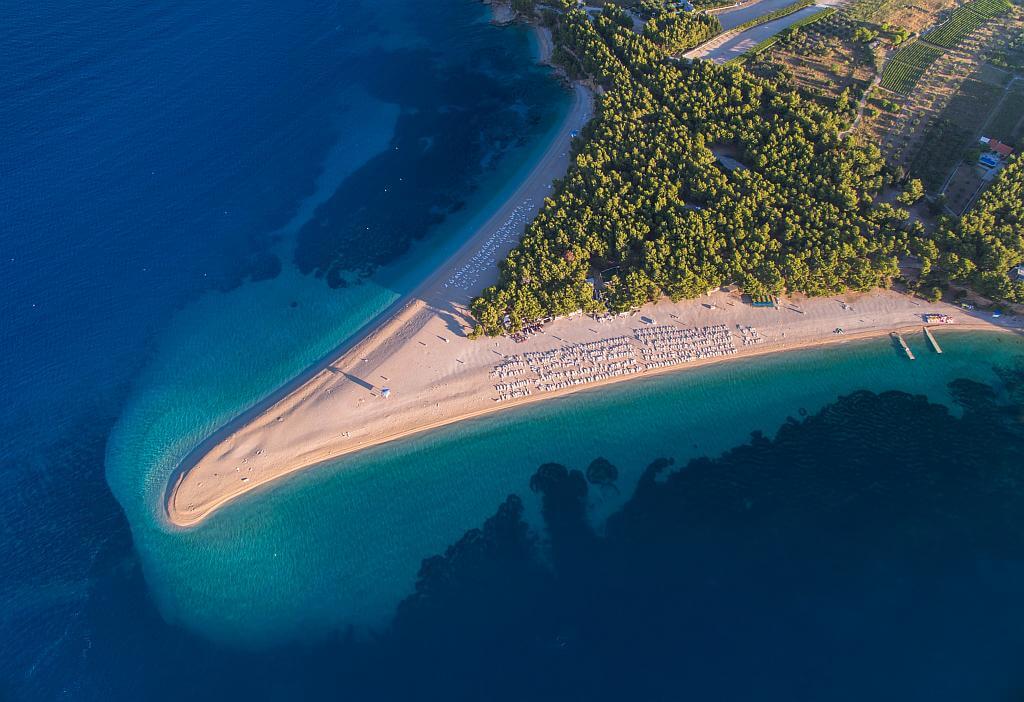 Image thanks Welcome to Croatia

Most of Croatia’s waters enjoy favorable weather and calm winds year-round, but on the island of Brac, you’ll find a beautiful little town called Bol that’s known for its wind. Craving a bit of excitement? Head to Bol for some of the greatest conditions for windsurfing or kiteboarding in the area. In addition to the breezy weather, Bol has a lovely sandy beach. Zlatni Rat, translated as “the Golden Horn,” is often called the nicest beach in Croatia. Definitely add this one to your itinerary for some quality time in the sun.

Thanks to these 10 places - which are just a few of this country’s many highlights - it’s easy to fall in love with sailing in Croatia. Eager to see it for yourself? There’s no better way to explore Croatia’s exquisite coastline than by boat. Sailing Virgins offers unique courses that allow you to discover Croatia’s islands and bays while learning to sail, so on your next visit, chartering and captaining your own vessel is as easy as possible.

If you're a total beginner wanting to learn in Croatia, click here to check out beginner courses. If you come with some prior sailing experience and are looking to level up to become a day-skipper, click here.