Which is better, a monohull or a catamaran?

This question gets asked a lot in sailing. Especially if you are looking to take your friends or family out for the week: which will be better, a catamaran (aka cat) or monohull (aka mono)? The short answer is it depends what sort of experience you are looking for. Let's explore this further.

Tell me more about monohulls and catamarans.

Monohulls are boats that have one hull. They are the classic sailing yachts that you see old black & white photos of, racing off Newport or Cowes.

Catamarans on the other hand have two hulls. They tend to be newer, and are said to be less traditional, although some of the earliest sailing boats ever developed may well have been catamarans. 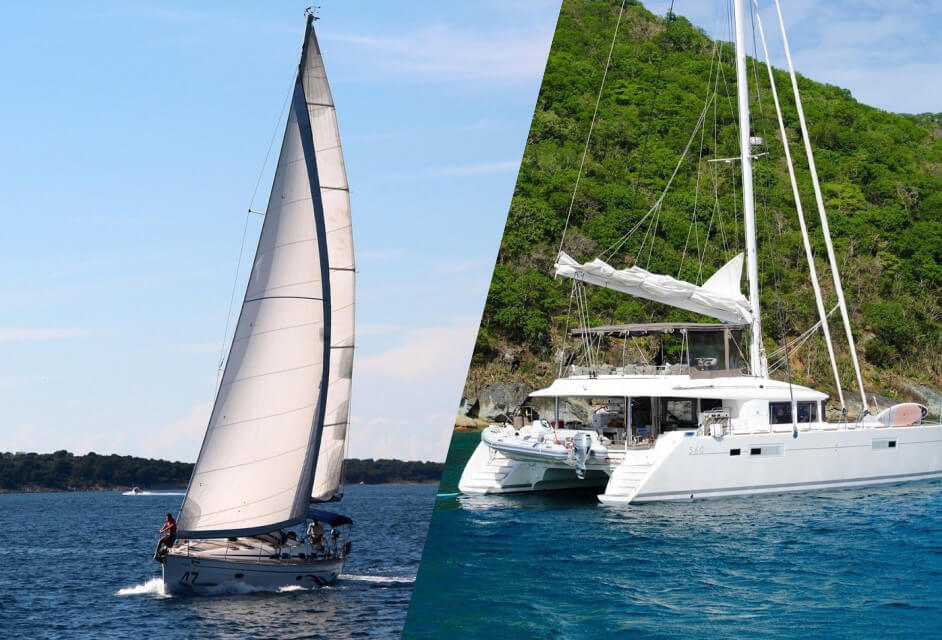 Now that we understand the difference between catamarans and monohulls, let's look at attributes that are important in sailing. Once we have explained these, we can look at how each boat-type deals with them:

For obvious reasons, you want to have a stable boat. Monohulls are a bit like a roly-poly doll, where when pushed over, they tend to right themselves. That is unless they reach what is termed the "angle of vanishing stability" or AVS. Catamarans deal with stability in a different way.

Catamarans tend to be much more stable in most conditions, but should they capsize, they quickly become stable, albeit upside down.

Nevertheless capsizing is such a rare occurrence that "stability" here really means comfort when sailing.

Your boat needs to strike a balance between sailing well and being comfortable to spend time in. The layout of the boat is important in this regard: what level it is on, how large it is, and how square the space is. 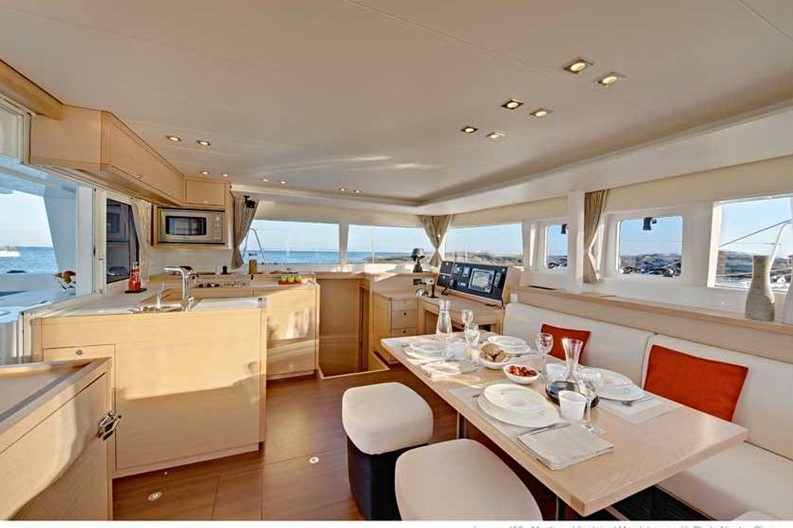 The draft of a boat is how far in the water it goes. "How much does she draw" means "what is the minimum depth of water that this boat needs so she doesn't go aground". Monohulls by definition require a keel, a heavy piece of iron or lead that goes deep into the water. Catamarans do not require this, and therefore tend to have a "shallower draft". 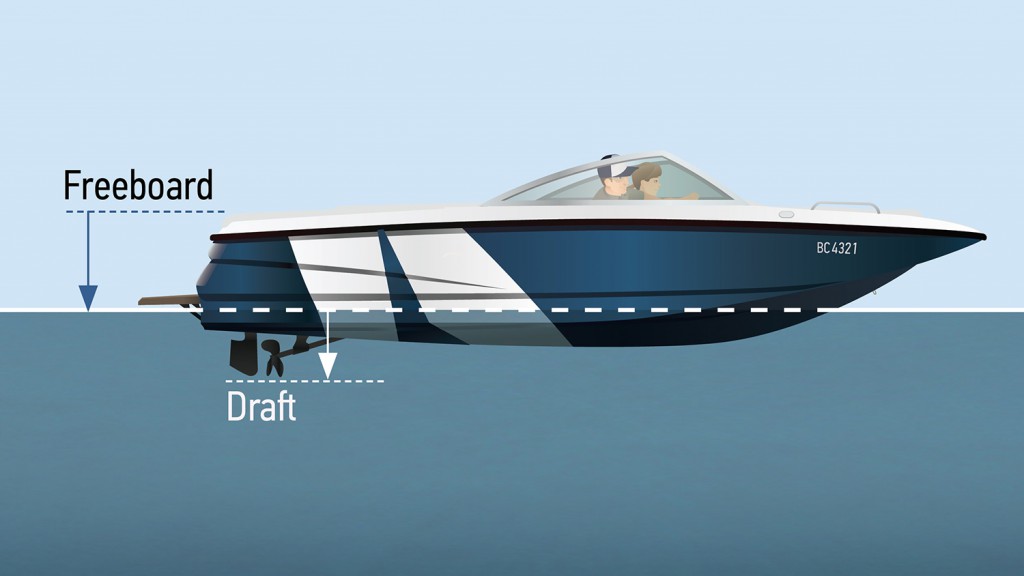 Being able to easily maneuver your boat is clearly an advantage in tight situations, such as when docking in a crowded marina. Both monohulls and catamarans have their pros and cons here, which will be explained further below. 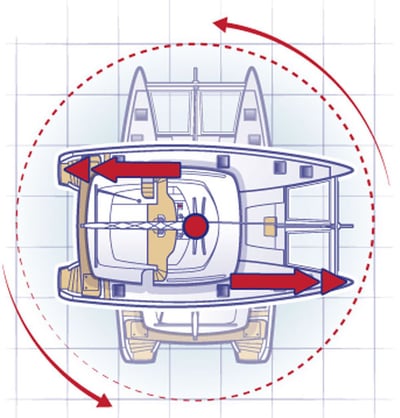 The speed of a sailboat is not as simple as for a motorboat. The angle of the wind has a large effect on the speed of a sailboat. Some boats can sail faster when close to the wind - monohulls normally fall into this category - while others can sail very fast when the wind is on their side (aka a beam reach) - catamarans usually like this sort of "reaching" sailing.

F50 catamaran in the fastest sailing competition in the world. Image thanks SailGP and James Wierzbowski

Having natural light and a decent view can make the living space much more comfortable. With monohulls, most of the living space is "down below" whereas for catamarans, most of the living area happens "up" in the saloon which is located between and above the two hulls. This creates two different environments. One person's "cozy" is another person's "claustrophobic". Just the same, one person's "light and open atmosphere" is another person's "soulless". So there is a fair degree of taste to this particular aspect. 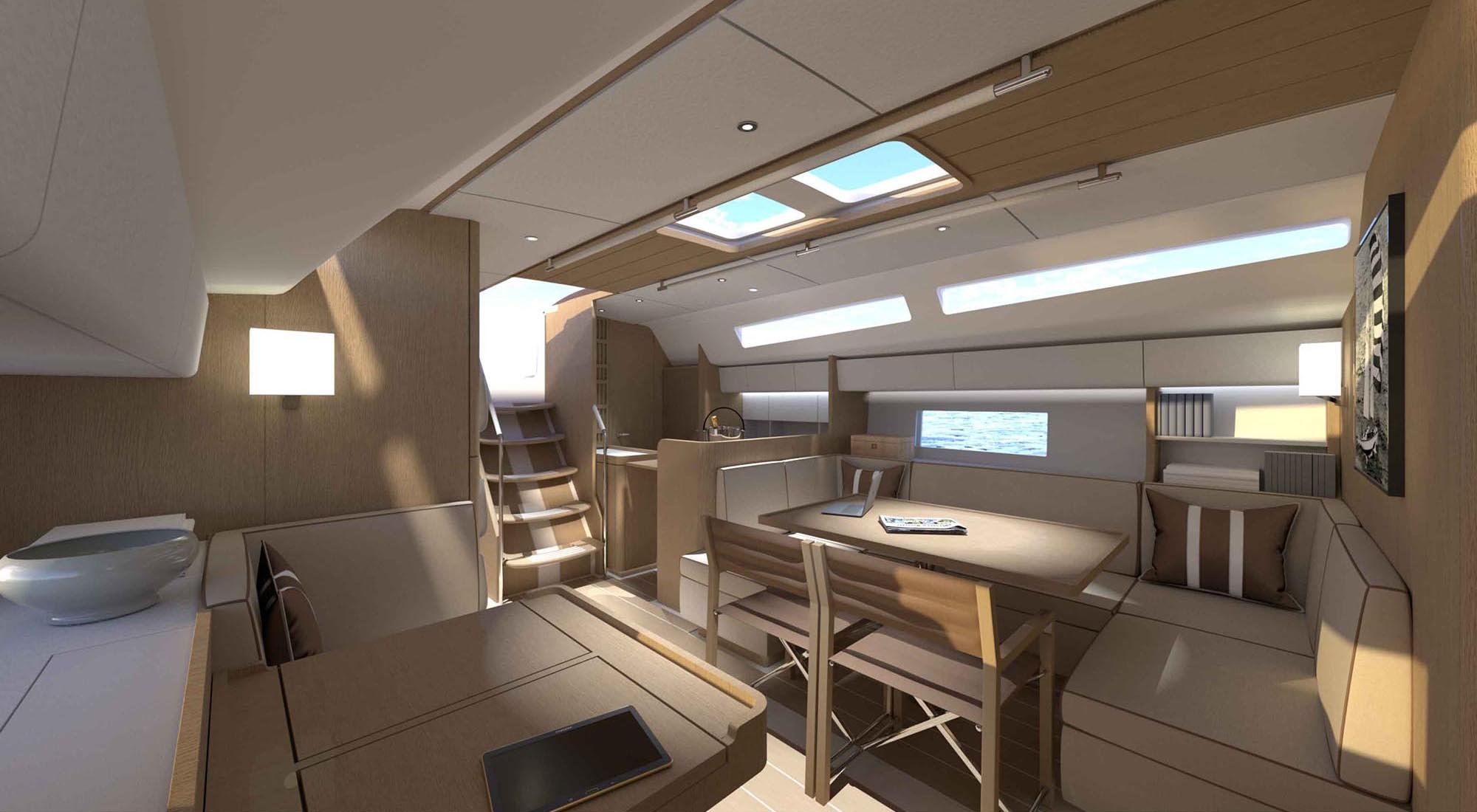 By this we mean the feel of the boat responding to the wind as she slices through the water. Some people sail for this feeling, while others simply sail as an ecological, efficient way to move from A to B. Monohulls and catamarans offer very different visceral experiences here. 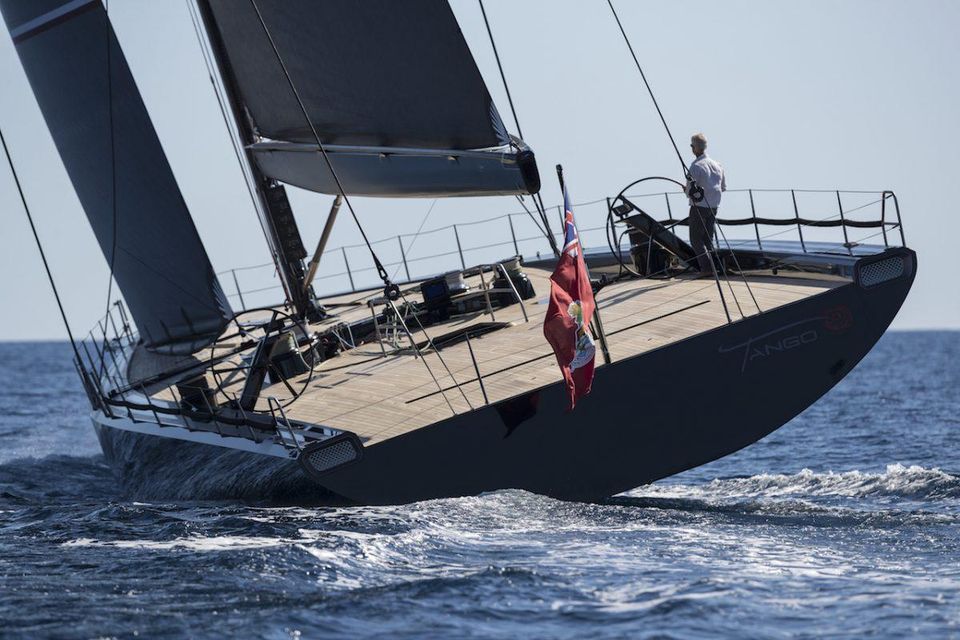 In breaking down the pros and cons of monohulls and catamarans, we found that a pro for one was a con for another. With that in mind, we think it is more helpful to list the pros of each, so you only read it once. Here goes:

Two hulls provides a wide base, which means in most sea states, less "bobbing". Every now and then, when the space between wave tops is a certain distance, the cat can lurch. But this is more the exception than the rule. 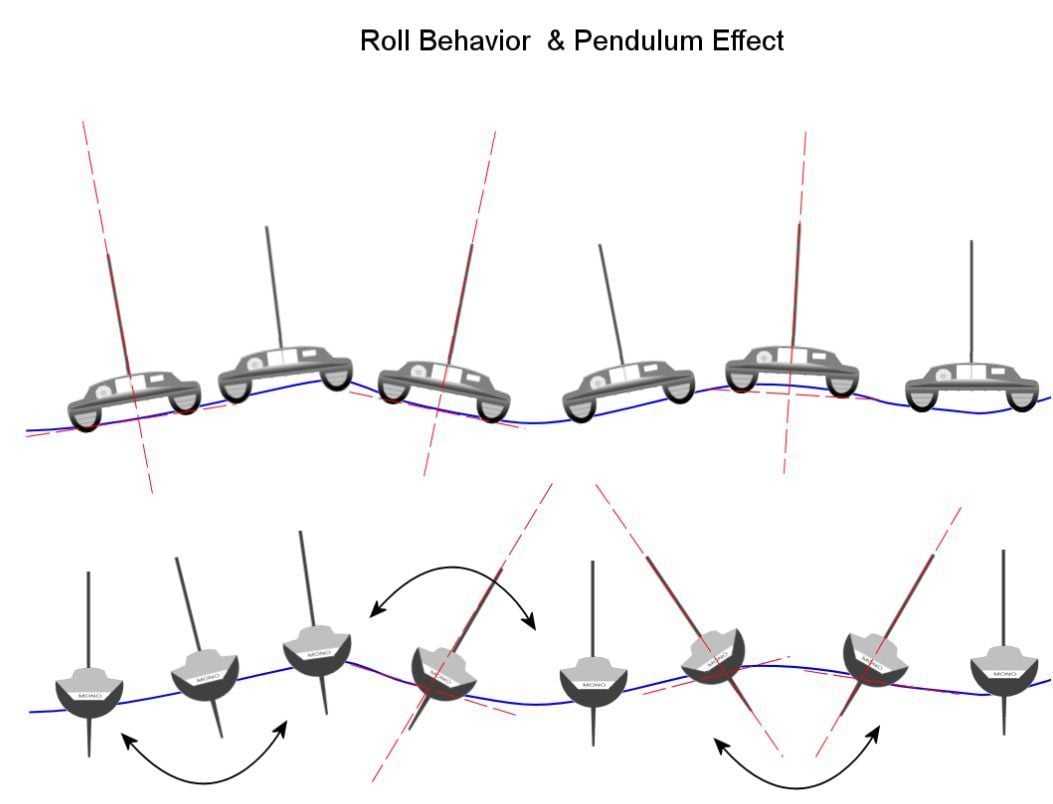 Great illustration of reduced rolling on a catamaran, image thanks aeroyacht.com

Here are some more pros of stability:

Apologies for resolution, a brilliant graph on catamaran stability, thanks sailingcatamarans.com

Catamarans generally have much more living space in the main salon, galley and cockpit, and in the cabins. This can allow for greater privacy when chartering with friends or children, as the two sleeping areas (one in each hull) are separated by the living area. Here are some more pros of space:

Interior of a Lagoon 620, image thanks Indigo Bay Yacht Charters

3. Catamaran living space is above the water line.

On a monohull, almost all living space on a is at least partially below the water line, which limits light and view, and can lead to claustrophobia in some. Catamarans on the other hand, sit above the water line. In addition:

4. Catamarans can venture into shallower areas.

The lack of keel on a catamaran results in a shallower draft, allowing to anchor in shallower water, which is especially valuable around reefs in the tropics. 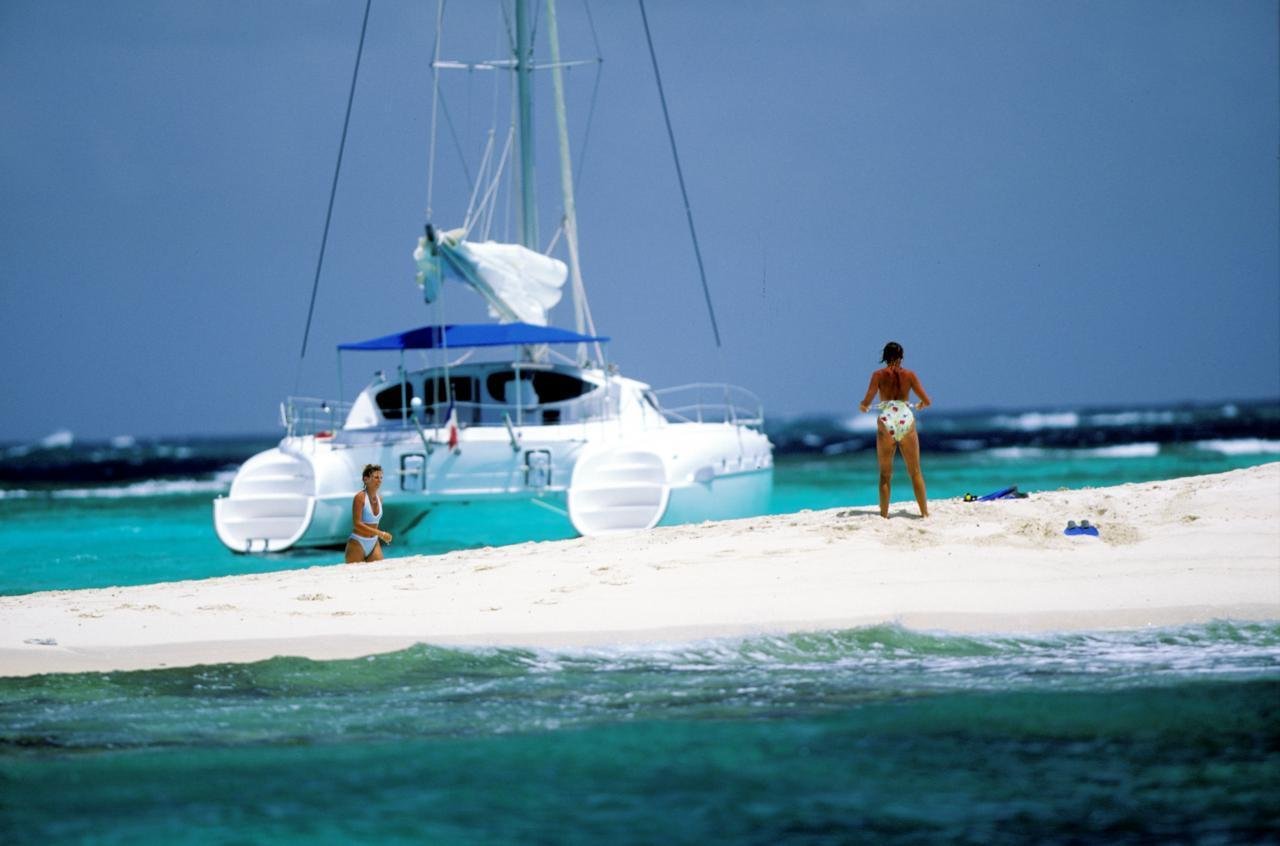 Shallow draft of a catamaran, image thanks aeroyacht.com

5. Catamarans can turn on a dime.

Because catamarans have two engines and two rudders, maneuverability in tight spaces is improved, with most cats being able to turn 360º within the length of the boat.

Without the need for a heavy keel, catamarans are lighter than an equivalent monohull. That, plus the fact that they keep their sails perpendicular to the wind, means they sail faster than monohulls, especially on a run or broad reach. 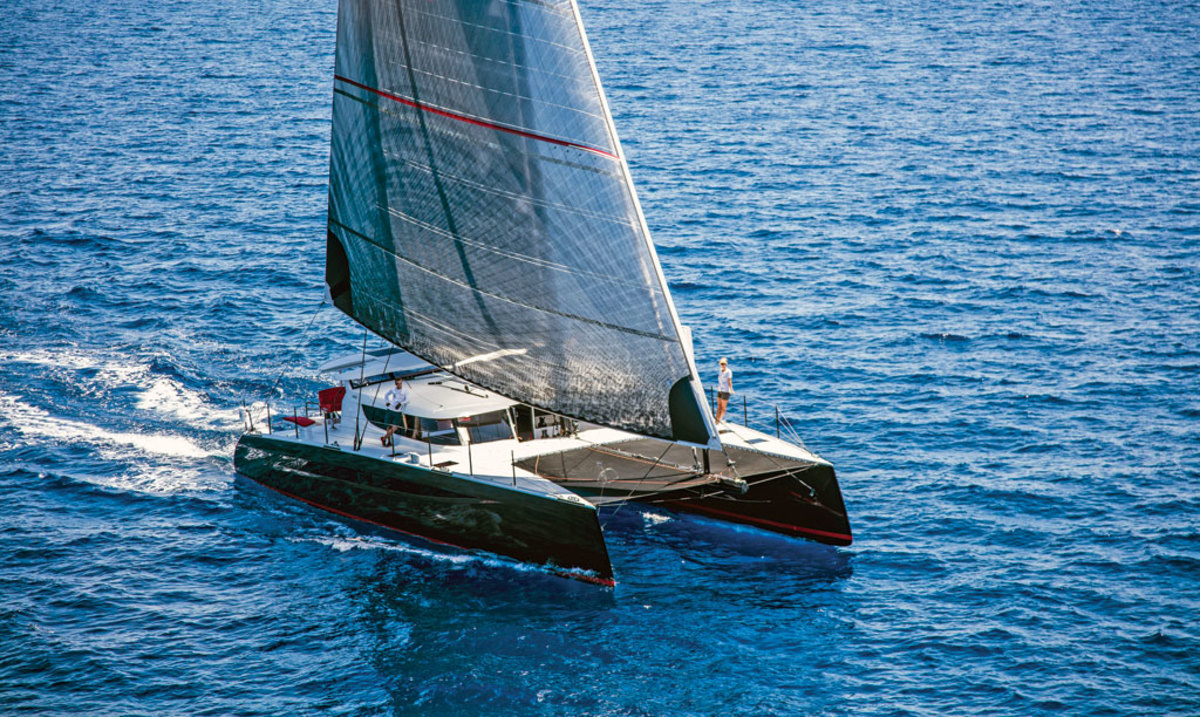 7. Catamarans are harder to sink.

Without the need for a lead-weighted keel, catamarans are not just lighter and faster, they are also harder to sink. Monohulls have been known to "lose their keel", by hitting something such as a semi-submerged container or even a whale. When this happens, the boat will tend to sink within minutes. Catamarans do not have a keel to lose, which means in this (admittedly very rare, blue-water) event, catamarans come out trumps.

Most catamarans have a trampoline or net at the front. This allows for spacious and comfortable cuddling under the stars - not to be underrated.

Catamarans on the other hand have a “non-traditional” aesthetic that some consider to be a little harsher on the eyes. Let's face it, many are downright ugly. 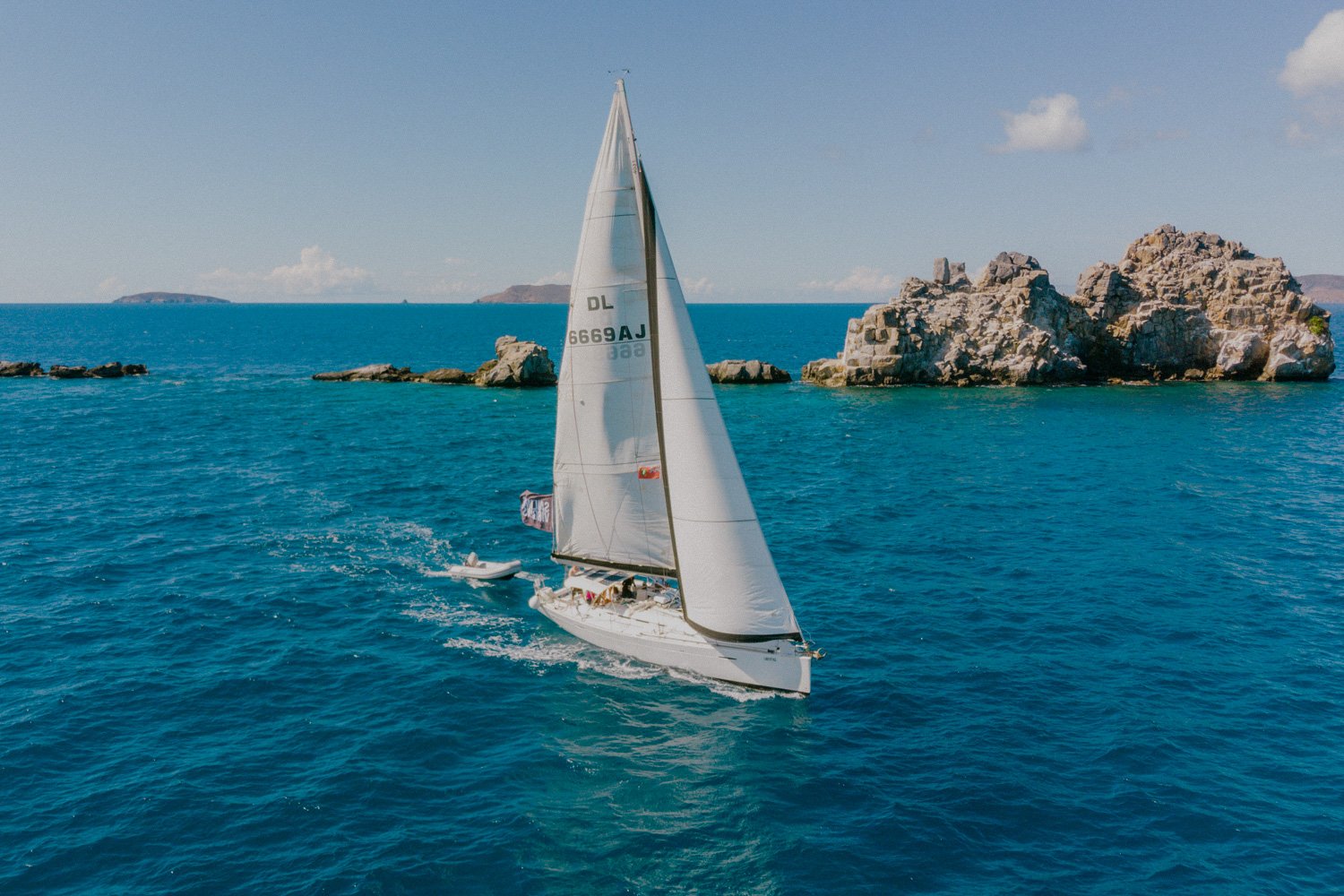 2. Monohulls are a romantic, evolving tradition.

Do you love the old photos of well-dressed people sailing their immaculate wooden monohulls in beautiful surroundings? If you answer yes to this question, take a good look at monohulls. That romance and tradition is still there.

3. Monohulls give you more options.

Due to the sheer volume of monohulls made over the last century, there are many more options for a boat that meets your individual lifestyle, personal aesthetic, or budget.

By definition, monohulls have only one hull, which means one engine, and [depending on your type of monohull, one rudder. This all means monohulls tend to come at a lower cost than their equivalent catamaran. In addition:

Due to their keel, monohulls can sail higher into the wind than most catamarans. Some of the more exotic catamarans have daggerboards which serve the same purpose as a keel, and therefore improve windward performance substantially. However 95% of cruising cats (ie. those you can charter) do not have daggerboards. Furthermore: 6. Monohulls give you more feedback when sailing.

This factor (and lower cost) is why most sail training happens on monohulls. If you have too much sail out for the wind, your overpowered monohull will heel over and become a pain to sail, before anything breaks.

On a catamaran you get less feedback at the wheel, which if you are not being very attentive can get you into trouble in big winds.

Then there is the visceral joy of "feeling sailing". A monohull will heel (meaning it is designed to tip over anywhere from 10º to say 50º) whereas a catamaran won't. While their increased heeling can be a performance disadvantage, it can also be an advantage as it is a lot of fun.

7. Tacking is easier on a monohull.

While they can accelerate faster, catamarans also decelerate much quicker, and as such can have a harder time maintaining momentum through a tack. It depends what sort of sailing you are after. If it is about enjoying being outside, and not so much about the sailing itself, then a catamaran is fine. But if you are out there sailing for sailing's sake, then you will probably find more enjoyment on a monohull.

While they may rock more in a side to side motion than their equivalent catamaran, monohulls tend to swing less at anchor.

Libertas on a mooring ball. Monohulls exhibit less "sailing on their anchor" when moored.

The above shows that there are no clear winners to the Catamaran vs. Monohull debate. At Sailing Virgins we teach and cruise on both monohulls and catamarans. If you have to make a decision yourself it really comes down to:

We hope that helps your decision making. If you would ever like to know more, if you become a Sailing Virgins Patron, you can take part in any of our once-per-month live Q&A sessions, where absolutely any sailing-related question if yours can be asked and answered. Patron support starts from as little as $3 per episode. Click here for more information.

How To Avoid Seasickness: 10 Tips For A Smooth Ride

Seasickness, or motion sickness, is a common problem that can ruin your sailing adventure. It’s...

6 Tips for Sailing in Tahiti

Considering a sailing trip to French Polynesia? Or maybe you’re coming back for more Pacific...