We caught up with SailGP pro and our first Sailing Virgins athlete James Wierzbowski as he gears up for the SailGP series finals in Marseille, France (Sept 20-22). He and fellow Team China members are training a few hours outside of London at the moment, preparing to face off against the top sailors in the world’s fastest racing series. 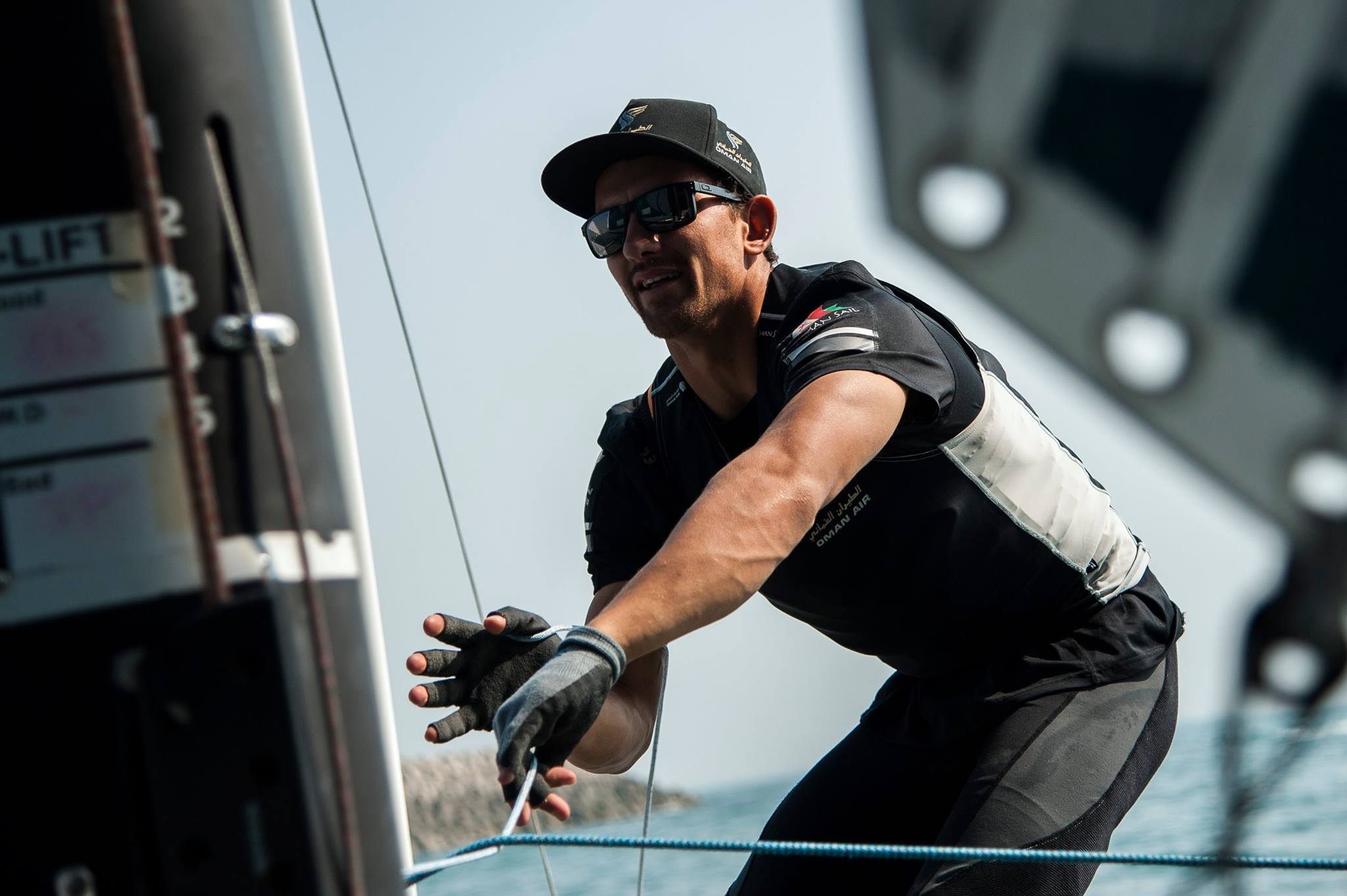 Comprised of just six teams (US, UK, China, Japan, France, Australia), the SailGP racing series is a fast-paced, tech-driven form of yacht racing that puts Olympic medalists, America’s Cup winners, and world champions on the fastest yachts known to man. The F50, an ultra-sleek wingsailed catamaran, does what even a few years ago would have seemed insane – foiling at speeds of 50 knots (57 miles per hour, or 92 kilometers per hour).

“The only way to describe it is trying to fly a fighter jet two meters off the ground in a bit of turbulence,” says James Wierzbowski, flight controller for SailGP Team China. “The G forces we feel on the yacht,” he continues, “I never imagined a yacht would be capable of giving that feeling that this boat gives us every time we sail.”

While the technology has been developing over the past 10 years, the F50 is an entirely new boat, kitted out with carbon fiber foils and capable of achieving the fastest speeds sailing has ever seen.

“When you see them go past, it definitely registers as incredibly quick,” Wierzbowski says of the F50 catamaran. “We have powerboats with 1200 horsepower that can’t keep up. There are times that you’re literally outrunning the boats that are designed to chase after you – you know 900 to 1200 horsepower – and it’s pretty amazing when we’re purely powered by the wind and nothing else.”

The F50 is a one-design class, meaning that every team sails exactly the same craft. Racing head to head on identical boats better showcases the pure skill of the sailors and levels the playing field, some say. According to SailGP, this style of racing “serves to promote close, exciting racing with an unpredictable outcome.”

With several speed records already broken this season, the excitement is palpable as the six SailGP teams approach the late September finals.

James Wierzbowski – A Young Sailor On the Rise

Originally from Merricks Beach, Australia, James Wierzbowski began sailing with his father and made his way through several classes of racing on his journey to SailGP. He competed in the 2013 Red Bull Youth America’s Cup and went professional while training for the 2016 Olympic Games. 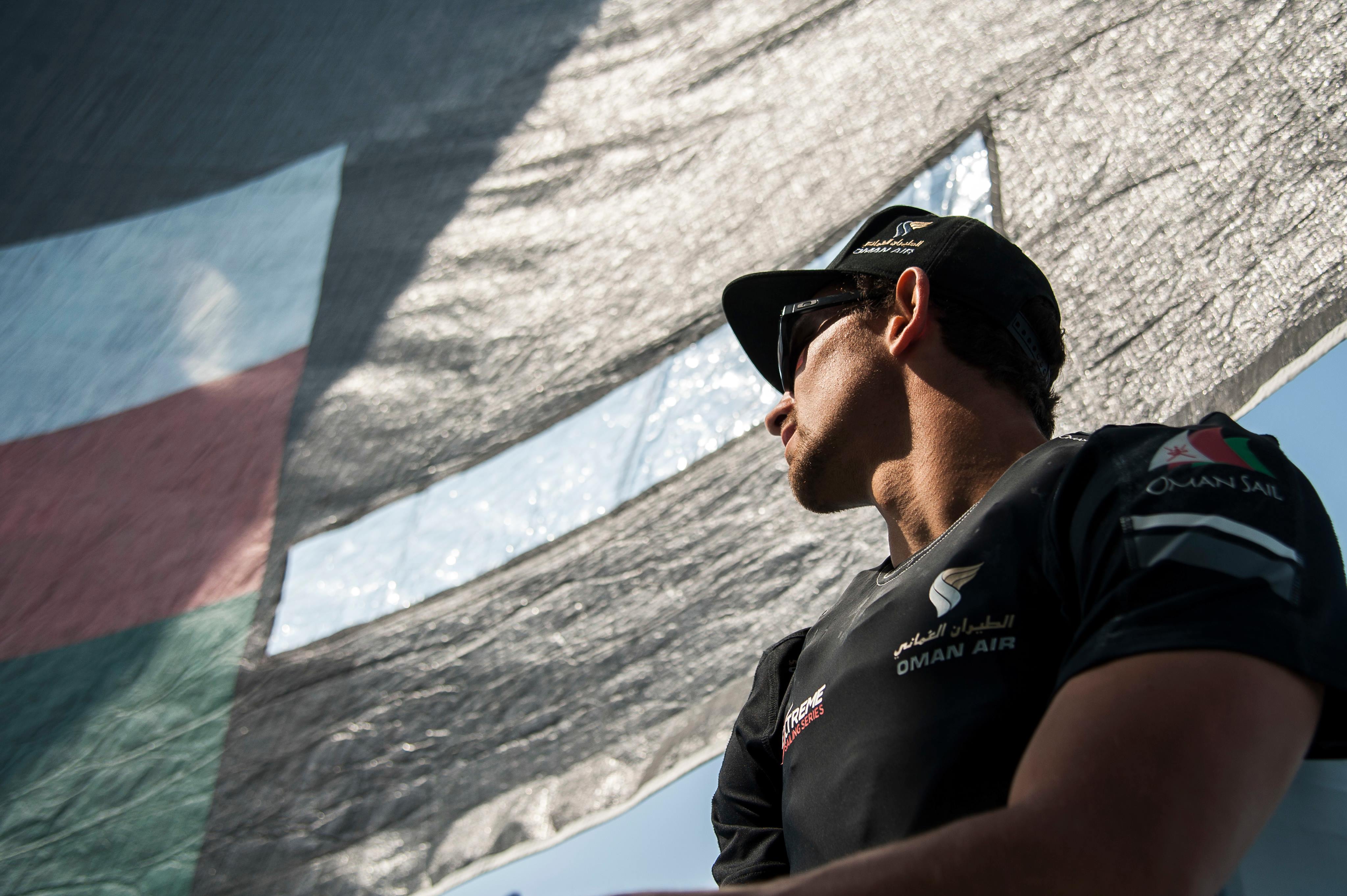 Together with then teammates Will Tiller and Stu Dodson, and current Team China skipper Phil Robertson, Wierzbowski and company took home the biggest cash prize in sailing to date. “It was pretty awesome,” he says of their 2016 World Match Racing Tour win. “I think it was the first time a million dollars had been given away, and we were completely unsponsored at that time, so we just split it four ways.”

“We were sleeping on couches and stuff,” he remembers. Three years and several team iterations since, Wierzbowski and Robertson have teamed up again - sailing for China in the new SailGP series. The two tap into those years of camaraderie on the water together, and enjoy a cheeky Aussie – Kiwi cultural bond on their mixed nationality team.

“He’s just super driven, and a really focused guy,” says Wierzbowski. “He’s always pushing the team and pushing himself as hard as he can. He’s just a really good leader in that sense - really leads by example.”

With New Zealander Phil Robertson at the helm, Team China brings together athletes from France, UK, Australia, and China, with 5 sailors in the cockpit at any given time. Each member of the diverse crew is bringing experiences from other styles of racing to the table. 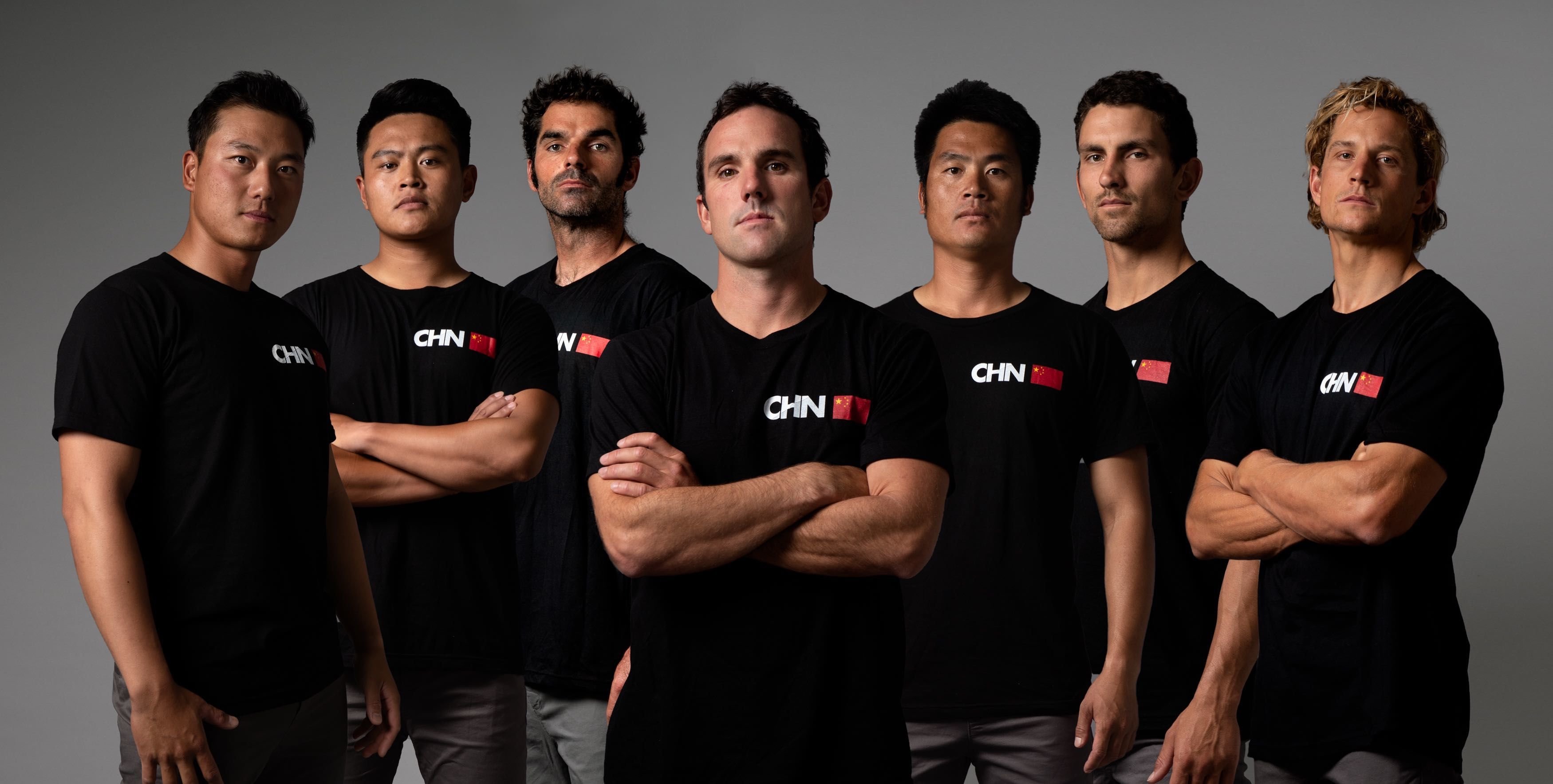 The 126-day around-the-world yacht race ended with an upset over Team MAPFRE and Team Brunel with a mere 16-minute margin of victory. Dongfeng was the first in the regatta’s 45-year history to include female members on the winning team.

While high-level sailing is still relatively new in China, interest is growing along with the rise of other adventure sports. Many, like SailGP CEO Russell Coutts, are betting on China’s seemingly “limitless” potential for fan engagement and talent pool growth.

Finding a groove with a new team can take time and money in any sport, but joining SailGP means learning to operate a boat very different from traditional yachts. Simply put, the F50 is not your grandfather’s sailboat. It is a virtual rocket, capable of traveling four times the speed of the wind. And instead of running around trimming sails, crew members stick to a specialized task - many of which are controlled electronically. In fact, there’s really only one rope on the entire yacht. 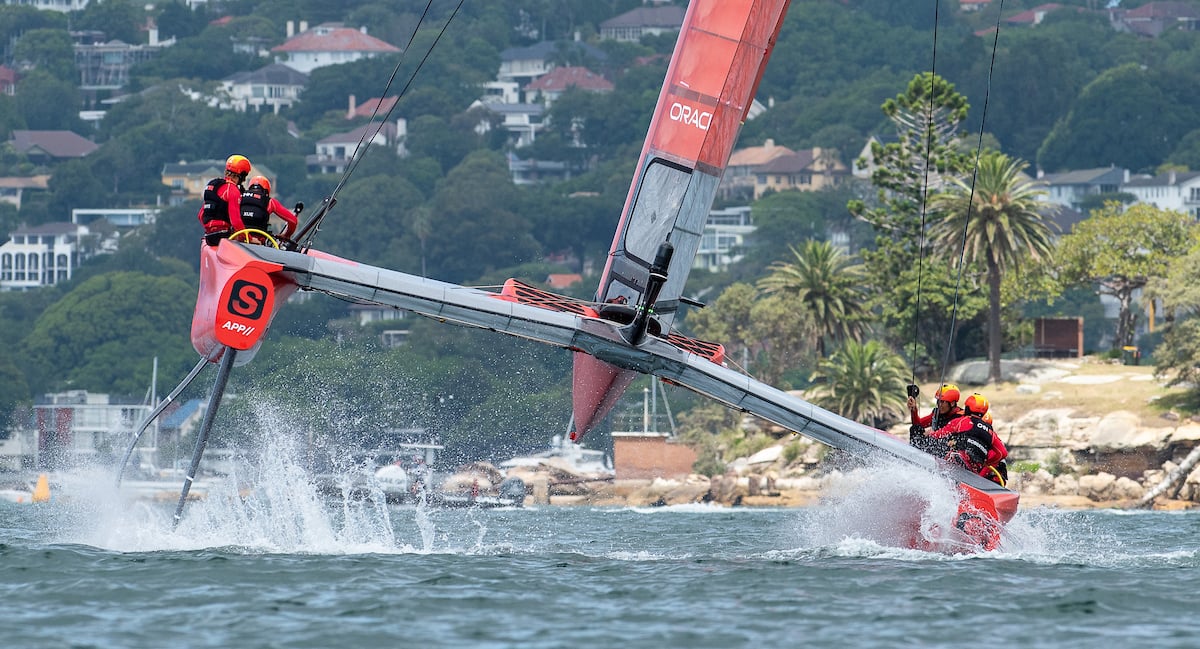 “If you told me even four years ago - let alone when I was a young kid growing up - that I’d be sailing a boat using only my hands on a controller with buttons, I wouldn’t believe you,” says Wierzbowski. As the flight controller, he is constantly adjusting the foils and rudders – the four appendages that keep the boat “flying” several feet above the water.

“The margin for error is smaller than any sailing boat that’s ever been built before. You’re literally on a knife-edge, and every little thing that each sailor on the boat does affects everyone else.” Thanks to some high-tech training methods, Team China has been able to iron out the kinks in a decidedly lower-stakes way.

“Much the same as a Formula 1 car, it’s very expensive to get the yacht onto the water, and for us all to learn, train, and get better,” says Wierzbowski. Instead of calling on a costly pit crew and pulling out the F50 every day, the team logs training hours on smaller boats and in an aeronautics style simulator.

“The simulator is an amazing tool where you can just sail all day long and crash as many times as you need to in order to learn the skills we’re trying to get a hold of,” he says. “You stay a bit drier and it hurts much less too.” 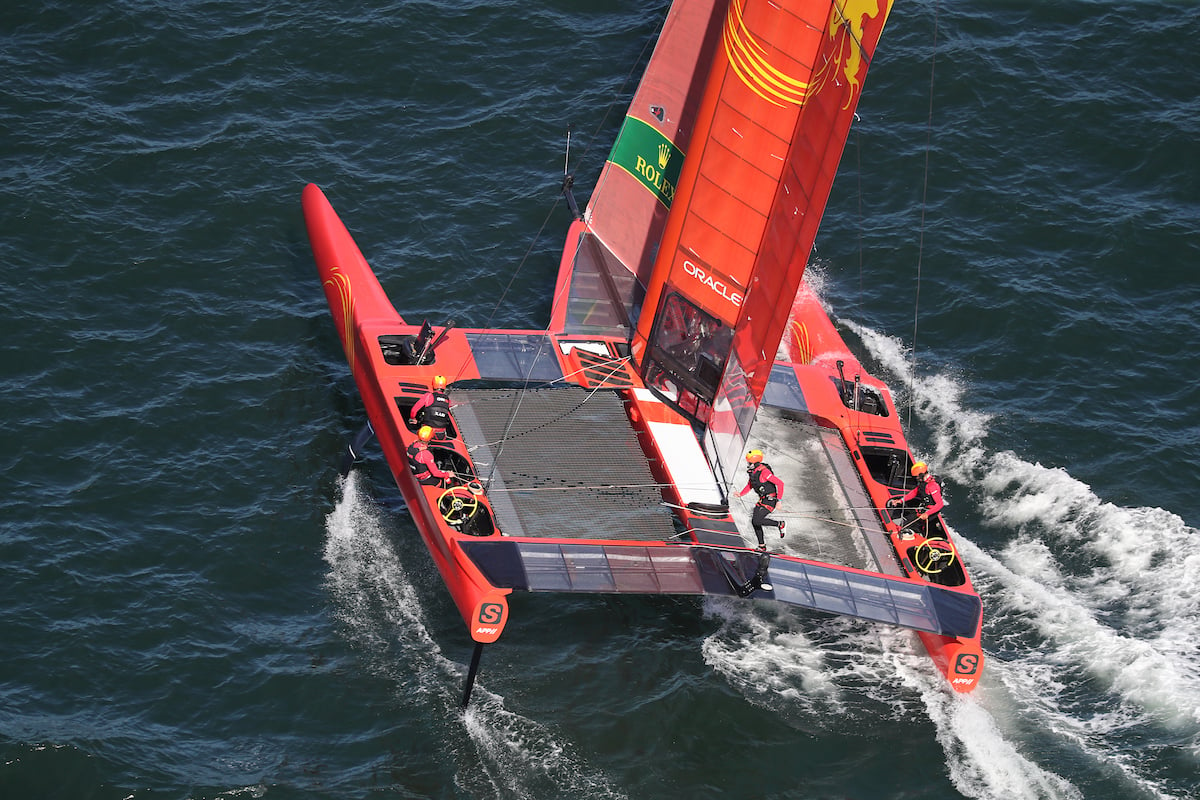 “In terms of the safety of the sailors and us being able to learn without the consequences and the danger, it is extremely important,” he says. “Doing 90-100k's per hour, the consequences are extremely high, and it is truly terrifying at times. If one person makes a mistake or is out of sync, then it will affect the whole boat.”

For Wierzbowski, practising with the team is only part of the equation. With a pricy, space-age yacht beneath them and the risk of crashing ever-present, he taps into a high intensity, CrossFit style training to keep his brain and body sharp. Instead of zoning out and simply lifting weights, he thrives in the fast-paced, competitive environment of HIIT.

“To me, fitness is all about training my mind and my brain. So what I’m trying to do most days is to be able to work physically hard with a really high heart rate and think clearly,” he says. “Being able to think clearly and make decisions is the biggest benefit in our sport whilst you’re under an immense amount of pressure - just retaining that focus.”

Like Roger Bannister breaking the four-minute mile in the 1950s, sport has a way of changing our perceptions of what is possible. Spurred on by tenacity, technology and pure one-upmanship, barriers continue to be broken in every arena. 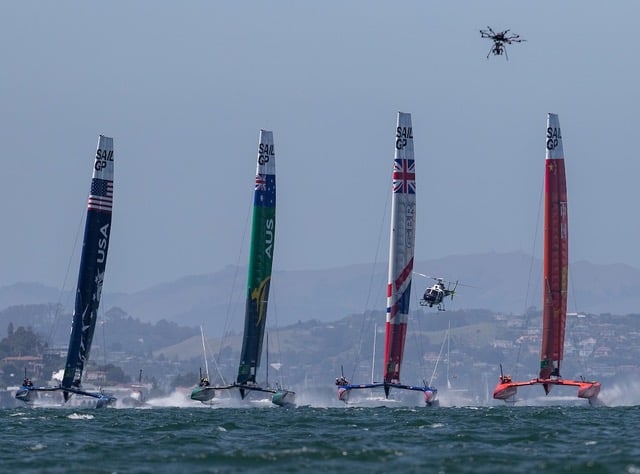 For competitive sailing, that barrier has been the 50-knot mark. It’s an elusive milestone that equates to traveling around 60 miles per hour on a racetrack full of variables, propelled only by wind. The 50-knot pursuit has come into the limelight in recent months as Team Australia’s Tom Slingsby and Great Britain’s Dylan Fletcher have engaged in a (somewhat) friendly rivalry in the press. Both teams surpassed the 50-knot mark in August, and in the same month, the US team took a spectacular tumble.

“There are very few sailors that have been 50 knots before, so to do it is a really big achievement,” says Wierzbowski, whose team has yet to break the mark. “Essentially, the way we see it is, there’s two clubs – there’s the 50-knot club and there’s also the capsize club.”

With one race left in the season - the three-day series final in Marseille -Wierzbowski and Team China have one last chance to join a club. Unsurprisingly, they’d prefer the first. “50 knots is incredibly quick, and you definitely want to get it right,” he says.

A Bright Future – The Changing Face of Sailing

When the dust settles after the intensity of training and competition, Wierzbowski waxes romantic about recreational sailing. “Any chance I get to go cruising and relax on a more sedate boat, I love the opportunity whenever I get that.  You can find the adventure and all of the coolest places to go.”

Professional sailors aren’t the only ones with dreams of cruising around the world’s most beautiful ports of call, and thanks to less expensive, more user-friendly boats, sailing is becoming more accessible than ever.

“I think it is changing quite a lot, and sort of moving out of that niche rich market into just people that want an adventure.  Things like Sailing Virgins - where you can just get onto a yacht and learn how to sail, and that adventure, and that experience - is amazing,” he says, touting the growing availability of sailing education.  “Whereas before you probably had to buy your own yacht and sorta get taught somehow, and read all the books, and navigate your way around the world.”

This ease of access to knowledge, coupled with the ability to “try before you buy” is spurring on interest in sailing for a young professional demographic that may have been entirely shut out of the industry before.  Millennials are changing the face of casual sailing - whether they’re in the market to circumnavigate the globe, or simply looking to put another cool skill in a toolbox that might already include surfing, rock climbing, or skiing. They’re interested in the sport at a high level, and might look up to Wierzbowski and SailGP in the same way a recreational climber might follow Alex Honnold’s free solo ascent of El Capitan. 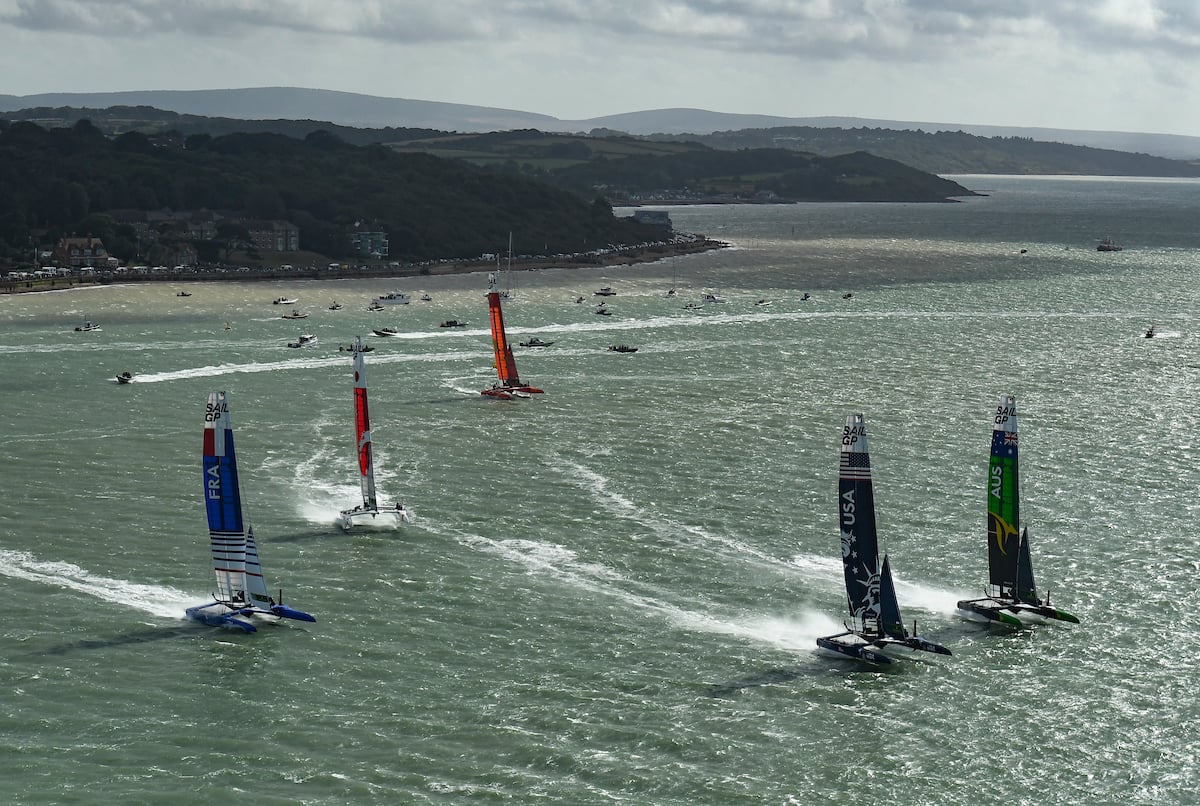 While you probably won’t see young hobbyists foiling at 50-knots around town anytime soon, they are getting inspired by exposure to racing, finding more accessible ways to gain experience, and ultimately, planning their own sailing adventures.

“I race for a living, and race the fastest yachts in the world, but I can’t wait to sail around the world myself,” says Wierzbowski – a feat many of his SailGP counterparts have already done.  On the way, he’ll be cruising by small beaches, catching some waves, and chilling with friends – a well-earned respite from the high stakes world of professional racing.

“Sailing has always been one of the greatest adventures,” he says, “And that feeling of freedom that you can get.” We're proud to be associated with James and look forward to his continued climb up the sail racing ladder.

Sailing Virgins is the highest rated sailing academy in the world for people in their 20s - 40s. Adventure sailing courses are held in the Caribbean, Croatia and Tahiti. These courses combine full-on adventure with world-class sailing training, and result in internationally-recognised qualifications. For more information, email us or check out all the courses on offer by clicking this link.