This blog post demonstrates my favourite, simplest Man Overboard (MOB) recovery procedure. In sailing there is a saying "between five skippers there will be six opinions". This applies to MOB recovery procedures. It's important to have a few techniques at your disposal and to be well practiced in this. If you as the skipper can rise to the occasion when it happens, you could save a life.


The above video demonstrates my favourite method of the crucial first part of MOB recovery in most conditions. This is further detailed with diagrams below.

We'll use the traditional term Man Overboard (or MOB) here as opposed to Crew OverBoard, but they are one and the same thing.

The Royal Yachting Association recognises the large variety of opinions and simply mandates to teach a safe and effective method. They focus on rigorous training for their instructors and at the same time realise that there are too many variables to mandate a one-size-fits-all approach. We agree.

I am an RYA Yachtmaster Instructor based in the British Virgin Islands. I'd like to explain to you my favourite method. One that you might not have seen before.

One little caveat, this is not the only method we use, it is just the simplest method I know. And when things go wrong, it can be nice to keep things super simple. With that said, it's a method that I haven't seen in the sailing literature. 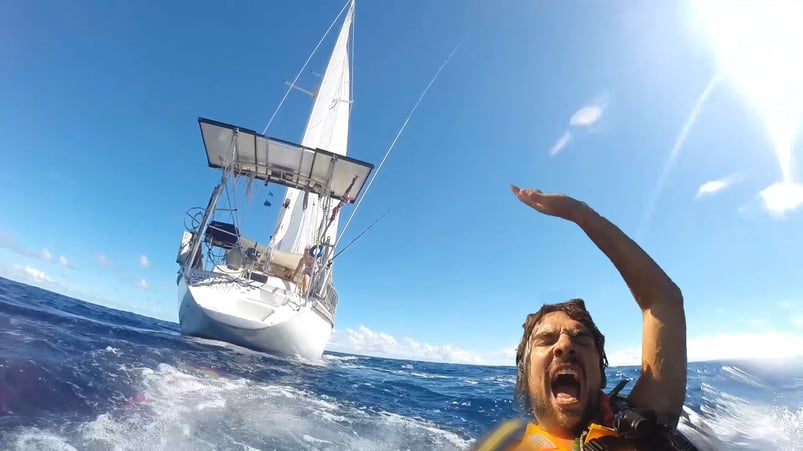 Thanks to S/V Delos for this rather dramatic image

You're sailing along, it's a lovely 20 knot breeze, and it happens. You hear someone shout "Man Overboard!".  You see them pointing towards the MOB like they were briefed.

There's a good chance it was unexpected. As the skipper you're now acutely aware of your responsibility for every decision you make.

Truth be told, the last time you did a man overboard drill was, let's see, a while ago. And it was on a different boat to the one you are sailing right now.

You recall the diagram in your skipper course showing how elegant a figure of eight pickup looked, with its crash tack, reach, gybe, reach. Or was that tack, reach, tack? Or put in a sudden heave-to?

All these things are going through your mind.

So let me put your mind at ease. The method below requires you to do just three things before you actually start the pickup procedure. Here they are:

First, throw something that floats at your MOB. Ideally it is an approved device such as a horseshoe and a Dan Buoy to make it easier to locate them.

Realistically it just needs to be something that will assist them while you are manoeuvring the boat to pick them up.

If you need to think laterally, do so. If it is a fender, or even the dinghy if you're towing it, then leave that with them so they are assisted, and so it is easier for you to locate them.

Now keep your wheel locked hard over and you'll find your boat will do 360 degree turns.

Your jib fills, then backs, as does your main. It makes a bit of a racket, particularly if its blowing, but as long as you have the right amount of canvas (ie. reefs in your sails), then you'll be fine.

Even if you're a bit overcanvassed, provided your main sheet is hard in, you should be fine, you'll just heel a lot more. 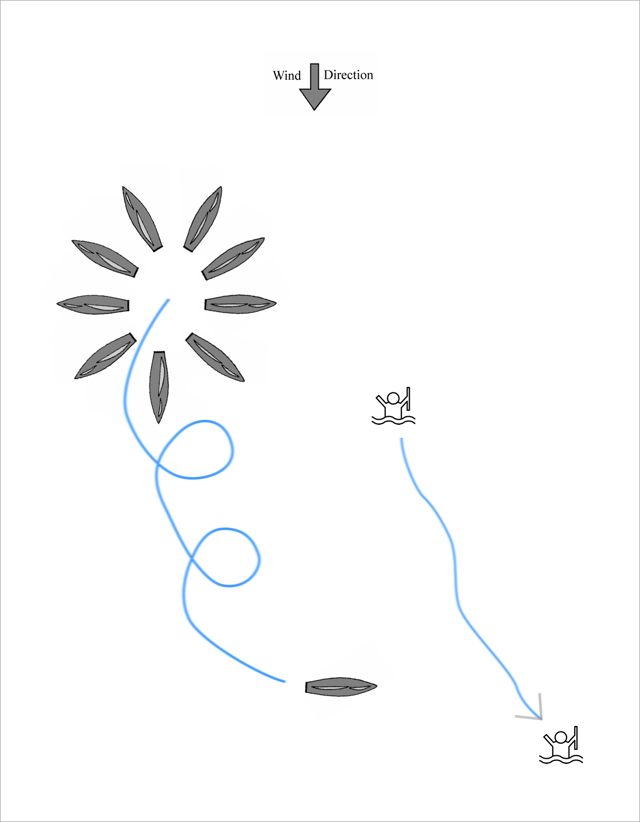 Importantly, your boat is drifting at more or less the same pace as your MOB. So you're not moving further away from them as you try to remember what that perfect manoeuver was again.

I'll repeat that in case the above diagram doesn't make much sense. As your boat does its 360 degree turns, it is drifting. But it is drifting at more or less the same rate as your MOB. So you stay relatively close. This is a huge advantage.


Now, while your boat is pirouetting, you can decide what you'd like to do.

Pull in the jib? Good idea. Do it.

Turn on the engine? Great. Go for it.

Have someone radio for help? If you think it is required. When the water is cold (such as the UK) it is at least a Pan Pan call and possibly a Mayday.

Now you can think about your approach to the MOB.

Again, every skipper has an opinion here.

Personally, in most conditions I like to pick up my MOB from upwind of them. That's right. Put my boat upwind of the MOB, perpendicular to the wind, and drift towards them.

You need to find balance, countering the forward force created by the sail with some reverse in your engine. Naturally you need to be careful to have your boat in neutral when the MOB is close by. This is a skill. This whole manoeuver needs to be practiced. And, ideally, taught by an instructor. If you're thinking about getting someone to instruct you, this blog post tells you what to look for in a sailing school.

The theory for the boat-upwind pickup (and for that matter, practice) says that the boat has windage (ie. is being pushed down wind) and the MOB doesn't. So rather than almost pick them up and be pulled away by your windage, you drift towards them. And you give them a little bit of calm as you are showing your boat's lee side to the MOB.

Are there risks to this approach? Most certainly. But then again, when you are in an MOB recovery situation, by definition you are balancing out the risks as best as you can.

There is no perfect method of MOB recovery. This is one method that we particularly like, and that is not shown in any literature (that we know of). So here it is. Have a practice. See what you think.

Sailing Virgins runs Island Adventure Courses and Fast-track Bareboat Skipper Courses out of its bases in the Caribbean (British Virgins Islands, Martinique and the Grenadines). If you're looking to buy a boat check out this blog post.

Thanks to Chris Hilger for filming the piece in the BVI and to Guy Bottomley for feedback.

in how to 6 Comments

Knowing how to anchor stern-to is...

Here at Sailing Virgins we are often asked about what it takes...