How 28-year-old Harvard student Chris got into sailing

If you're in your 20's or 30's, from the Northeastern US and are considering doing a sailing course, hear what student Chris had to say about his experience with Sailing Virgins.

Some background: In June 2017 Chris, 28 years old from Michigan, did his first Sailing Virgins course in the British Virgin Islands. He was back within a month to take part in the down-island adventure, between Guadeloupe and Martinique, where the interview takes place.

James: Alright Chris.  We've sailed quite a bit together for the past few weeks.  For the sake of the listeners, what's your name, how old are you, tell us a bit about your background.

Chris: My name's Chris, I'm 28 years old, and I went to the University of Michigan as an undergrad, worked for a few years at a tech company, and now I'm headed back to graduate school for data science at Harvard.

James: Harvard data science, omg, such a nerd.  And so that's gonna be what, 18 months?

James: Okay.  And so you found yourself in a gap between work and studying.

James: And so what made you want to do sailing?

James: Got it.  And so I know through our marketing software, as you know, I can see when people are researching stuff, and you've researched so much in terms of...  So you must have done it to other schools as well.  What was it that made you consider Sailing Virgins and ultimately do a course with Sailing Virgins?

Chris: That's right.  So there were a few different schools that I contacted, and there's particularly one in Thailand that I had talked to the owner there, and ultimately it came down to location.  So being from the east coast, it's much easier to get down here than it is to go to Thailand.  I really wanted to learn a skill for the long haul, and a network for the long haul.  So I figured I could go all the way to Thailand, and I feel like that would have been a one-and-done, kinda do the week, and then that was it.

But I felt through engaging with you guys at Sailing Virgins, there was more at play through your connections to the yacht week, and the skippers there, and the other people that you've run through the program throughout the year that I'd be able to find a rich group of people that I could identify with and go on future charters together later on.  And like I said, the location, it's just easier to get down here.  So if I had a week or two in January, I could easily get a flight from Boston down here, not to Thailand.

James: Got it.  What's so important for you about learning how to sail?

James: Yeah, why did you decide on sailing of all things. You could have dome other adventures and that sort of stuff with your time off. Why did you put it into a sailing course?

Chris: I actually, I was taking the advice of one of my mentors who said I should really take time to learn a new skill, rather than just backpack around the world, or just party all the time.  It was a try and learn a new skill, and I looked at the different skills I could learn.  And sailing, because it was something that I always wanted to learn, it just made sense. 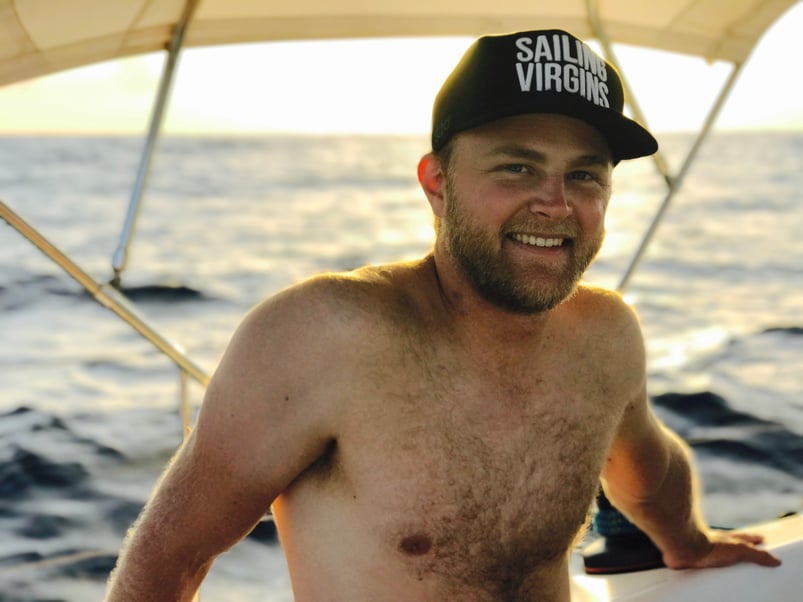 James: So what do you think, now that you've got your captain's certification, day sort of sailing captain, and you've sailed in between countries.  So you've done quite a bit of experience even in this last short period, within the last month.  What do you want to do with it?

James: Great.  So what, here in the Caribbean?

James: Yeah great, you should do a crossing, that would be awesome. Now, are there any lessons or metaphors that you learned sailing that you think you can apply to your studying and your work?

Chris: Oh totally.  That's one of the reasons I really like sailing, is that there are so many lessons you can apply elsewhere.  One is patience, things change and come and go, such as the wind, such as people's mood and attitude, and you have to be patient to weather that storm, if you will, and get through it.  You know when we were out on the course, we ripped our sail, and it was a lot of work to take the sail down, to find a guy on one of these islands who just happened to be a sailmaker, found him at the right place at the right time, and we're able to get it fixed.  But we had to have patience to say, "We're gonna try to get it fixed.  If we don't, we'll sail on two reefs, no worries." But we worked as a team to get through that.

It's also, it's in the journey, not the destination, which is often said about sailing.  But it's so true.  There are many faster and easier ways to get around the world, whether it be flying or even a motorboat, or drive by car.  It makes no sense to actually sail a boat these days if you're just concerned about the destination.  But when you're just out there with a few other people in the boat together, and you're just experiencing it just on your own with that small group of people, it's really an experience that's hard to describe until you actually do it.  So it really is about just enjoying the moment, being with the other people, and about the journey, not the destination.

James: That's one of the best descriptions I've heard about sailing; nice work.  Now, what would you say to someone from the northeast considering doing a sailing course?

Chris: In what way?

James: Well, two months ago, you were from the northeast considering doing a sailing course, by this sake you'd probably committed.  But let's say just before you committed you thought, "I need some adventure, I've got a good job or I've just come off a good job and about to go back to grad school.  That side of things is fine, but I need to scratch that adventure itch." So to those people in the northeast, what sort of advice would you give them?

Chris: Right.  So I was definitely looking for not only to learn a new skill, but to scratch that adventure itch as you mentioned.  And I looked at other things like skiing; skiing is very popular in the northeast.  And I actually did a big trip out west for a week and did that.  And I found it was interesting but it doesn't compare to anything that we were able to do on the down-island sail.  Because there are just so many natural landscapes and natural things to go explore that it's just incredible.  The mountain climbs, the free diving, just being out in the water.

So the advice I'd give to someone in the northeast looking for adventure is I'd tell them to kinda look to do something that not everyone else is doing.  Very few people on a holistic scale actually go pursue sailing.  But the people that do find that the amount of adventure you can have far surpasses pretty much anything else you can find.  Just because you can take the boat anywhere, you can put it on anchor, you can stay for however long you want, or you can keep going.  You can climb awesome mountains, free drive awesome reefs, and in my opinion, it far surpasses any type of snow skiing that you could do, or rock climbing or something like that.

James: Thanks for coming today.

A month or so ago we came across a route planning tool that was...

This week we interview Giuliano D'Angelo, sailor, designer and the creator of  "All The Sailing On...