This week we interview Giuliano D'Angelo, sailor, designer and the creator of  "All The Sailing On A Single Map" poster.  Q&A is under the image.

SV: Firstly Giuliano, well done on such a beautiful infographic.  Even your title for it is written in an Italian accent (always a good thing).  In a sentence what made you want to create this piece?

We wanted to create a sailing infographic that is both useful and beautiful.

SV: Why did you choose sailing as a theme?

Because I love sailing and I love design. Both of them, are strong passions since I was a kid. We spent summers between the sailing school and the table, drawing maps and pirates while listening to reggae music. Sailing and sea topics are very fascinating to be represented in a poster map. 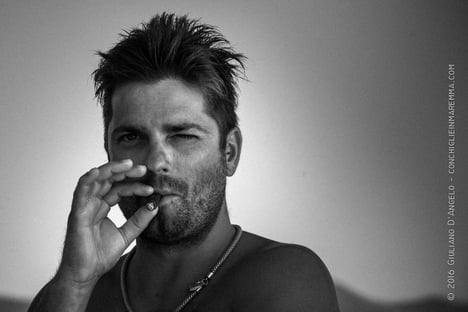 SV: How many man-hours did the graphic take to produce?

Lots. I can't count exactly how many, but it's a work going on for months. We had many brainstormings on board the Soul Rebel, and at the port bar between one drink and another. Trying to put together everything we liked about sail and everything that we considered useful. It's like we recovered all the notes of an entire sailing course: the briefing scribbles drew on the sand or on the sun-peeled blackboards at the beach sailing school. Places we frequented for years.

SV: How many people did you need to consult?

Just me and Samuel, my cousin. I'm a sailor for passion, I had a small sail-boat called The Monkey and the best thing I learned is running the yacht and going out to the sea alone. That's the only way to get used to it and feel confident with the boat and the sea. Samuel is a professional skipper and a sailing certified instructor. He works with yacht transfers, sailing courses and nautical service, he's the captain of the Soul Rebel a Sun Odissey 34.2. He has quite a knowledge in restoring boats, and that's also an important piece of skill. You know, it's not nice to ignore what's under the hull: if you know everything of your sailboat you can solve any unexpected event.

SV: Were there any controversial parts to this that you debated over?

Nope. Everything started with the central core of the map, the one we named "Sailing Rose". It's a graphical evolution of the traditional wind rose and that was the central beginning part. I tried to integrate as much as possible on it: point of sails, directions, manoeuvres, cardinals, degrees, wind names, orientations, sectors, astronomic... And everything else, surrounding it.

The only concern was to get only the things really useful.

SV: What is the most difficult element in sailing to represent graphically?

Knots and ropes: their twists are really hard to represent. The other challenge is not graphical but linguistic: translating in English. We have a dedicated language - ancient as it is the navigation history in mediterraneo - with specific words unknown to the common vocabulary. Getting the same terms in english was not easy at all; and I must say that it lost some of the fashion.

SV: What general advice does an artist like you have for sailors?

Love the maps! First paintings of ancient humans were probably maps, because we needed to explore and understand geographic since the beginning of our civilization. So maps were probably the first form of art.

There could be even more. "All the Sailing on a single Map" will evolve and grow in time. We will integrate more terms and more tips, we're already looking forward to anchors types, signals, more types of sails, on-board recipes, fishes, shells, sea monsters, and more terms. Follow us on http://www.giudansky.com (design, maps and infographics) and on http://www.vuoifarevela.com (sailing in Tuscany and nautical services). Follow me on twitter for updates.

How 28 year old Harvard student Chris got into sailing

A month or so ago we came across a route planning tool that...