Notes from a Caribbean Sailing Adventure

Some people dream of sailing between the myriad islands of the Caribbean. They dream of harnessing perfectly suitable trade winds. Dream of crystal clear water. Dream of sampling organic chocolate in Grenada, freshly baked croissants in Martinique or simply catching a fish off the back and eating it as sashimi. We sail the Caribbean for a living! We take people on advanced adventure sailing courses up and down the windward and leeward islands in the Caribbean, through both blue sky and perfectly horrendous conditions. This post writes about our most recent adventure, from Grenada to the Virgin Islands, undertaken in October 2016.

On October 1 we left a lovely little bay curiously named “Prickly Bay” at the bottom of Grenada.  We were heading north, bound for the Grenadines. The boat we were sailing is a Beneteau First 40, freshly upgraded from spending six weeks on the hard in Trinidad. Firsts are legendary boats; they are one of a very few who fit into the “racer/cruiser” category, being both very fast and well equipped for cruising. 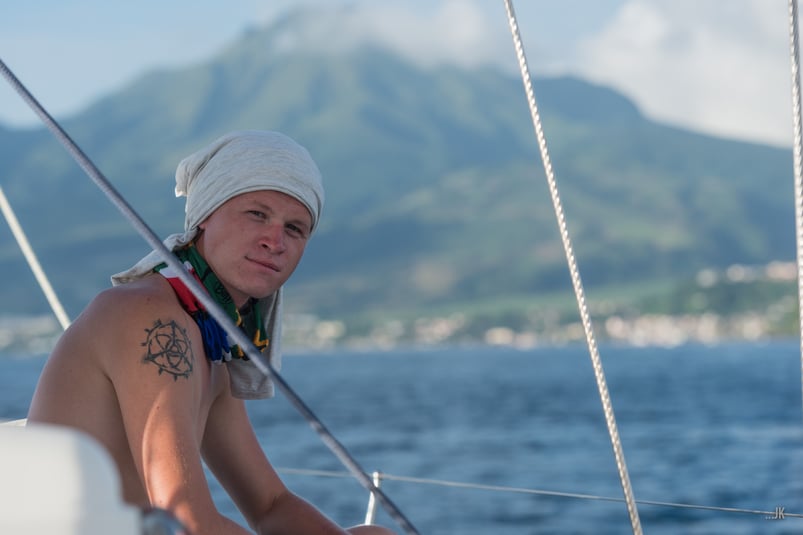 We had spent some time in Grenada on the way down. This lush, verdant island is a place worth visiting. If you do go make sure you visit the chocolate factory, the rum distillery and the underwater sculptures.  Grenada’s most recent attachment (before independence) was to the UK, yet all the names are French. The islands with their history of being traded between European monarchs as assets maintain a colourful mix of English, French and Spanish names. Likewise, the inhabitants also speak a mixture of these languages, thrown into a mixing pot and called creole (of which there are several).

Next stop was the Grenadines. Although having similar names, the Grenadines (including their main island St Vincent) is actually a completely different country to Grenada. These have some of the more incredible small island cruising grounds on the planet. Places like Tobago Cays (as distinct from the island of Tobago as in Trinidad), where you can swim with turtles, and Mustique, an island favoured by billionaires, make for a wonderful place through which to sail. We spent some time on the lovely little island of Bequia having some sail upgrades done to the boat, then moved on. 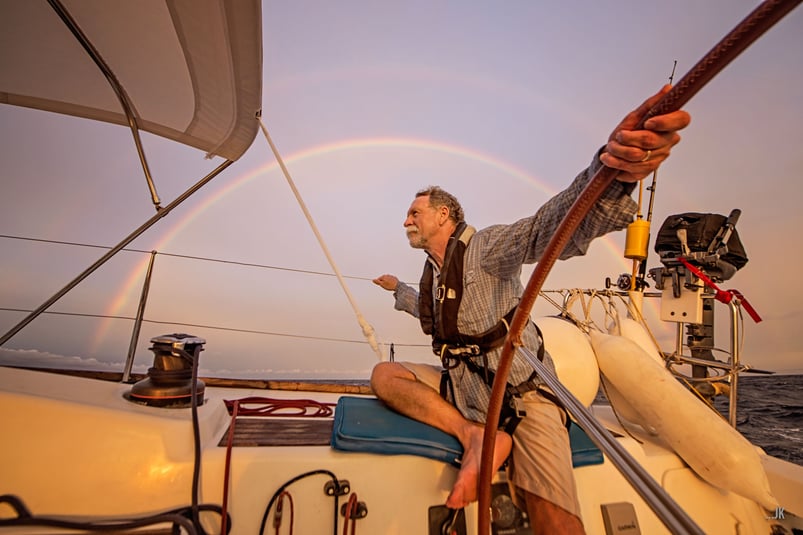 Leap-frogging St Lucia (where previous trips had us stopping in the seaside town of “Soufrieres”, with grandiose peaks rising from the sea to over 1,500’, but where the hustling by some locals makes a stop there an arduous affair), we sailed across the Saint Lucia channel by day to reach the French sailing town of Le Marin on the southern side of Martinique. If you have a French boat, this is the place to go to get work done. Martinique is this writer’s favourite island, with a great blend of French and Caribbean culture. Le Marin itself is a legendary hurricane hole, meaning it was full for the off-season with boats protected from all but the largest of storms that may pass through. 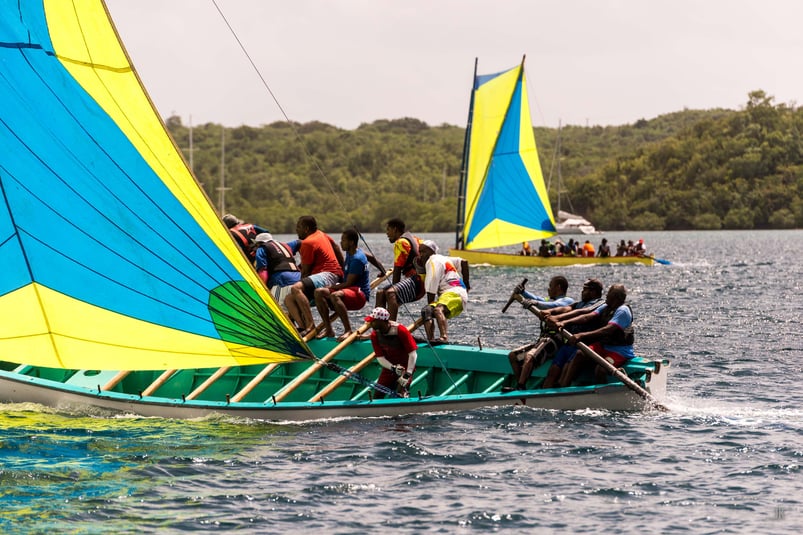 Leaving Le Marin we sailed up the west coast of Martinique, arriving at the now dormant volcano above St Pierre just as the sun was setting. Montagne Pelee made itself known at the beginning of the 20th century, wiping out all but two of the 30,000 inhabitants of the northern side of the island when it blew up. It was the worst volcanic disaster in the entire twentieth century. It is now a sleepy, charming place. As well as having a couple of wonderful restaurants, there is a small museum showing before/after photos and with some samples of glassware moulded by the infernal rivers of ash which flowed as a result of the volcano.

Our next goal heading north was the town of Roseau, sitting on the bottom of the Jurassic-like island of Dominica. Dominica is something of an oddity. Its coastline is very steep-to and without any bays to speak of, is very exposed to any swell. We happened to be sailing while Hurricane Matthew was raging 800 miles to our west. The rocky nights resulting from this made for some pretty rocky conditions! What Dominica lacks in bays it makes up for on the actual island. One day we began early, drove for 20 minutes to a waterfall, and started our hike up to see the Boiling Lake. This seven-hour hike (car to car), although well worth it is not for the faint hearted! We found a natural hot pool on the way down, fed by warm mineral-rich water.  It was magnificent. The beer, pizza and burgers we had at the completion were well-earned. 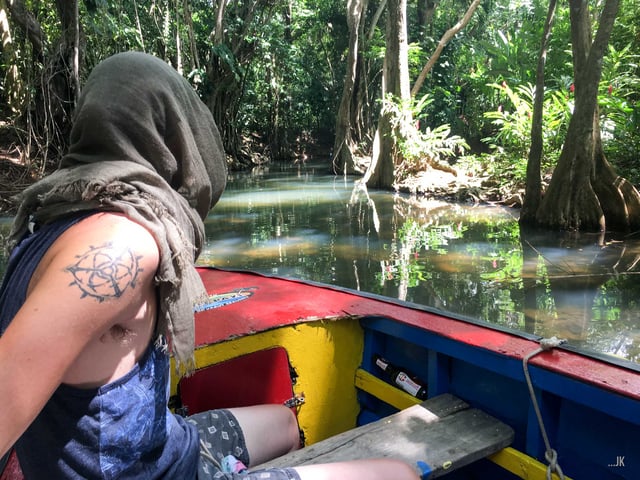 A day's sail up the west coast of Dominica took us to the northern town of Portsmouth. As soon as we dropped anchor there we were met alongside by “Lawrence of Arabia”, a well-known guide in these parts. For the standard rate of US$20 each (plus $5 park fee), Lawrence took us in his boat up the Indian River. This river was made famous in the second of the Pirates of the Caribbean series. The witch doctor's cabin still stands to this day, as does the bar at the end of the river which is surprisingly well done and which sells some surprisingly powerful, well-named “rocket fuel”.

The following day was a wonderful if light sail to the small French island of Terre-de-Haut, part of the legendary Saintes island group. These islands, just off the southern tip of Guadeloupe, ooze charm in a part of the world where it can sometimes be a challenge to find. Following a magnificent, simple lunch at “Les Pieds de L’eau” (the feet in the water) brasserie, we sailed on, destination Riviere Sens, a small marina on the south-western tip of Guadeloupe. We came in at night and went straight to Le Barracuda, an excellent French restaurant serving raw, freshly caught local fish in a style best done by the French.

We spent the next morning making some welcome improvements to the boat, then had an easy sail up the Guadeloupe coast to the northernmost bay of Deshaies. We arrived there just as the sun was setting and chose to eat on the boat. The next morning in blue sky conditions involved a crossing of the Guadeloupe Channel to Antigua. Previous crossings had shown this stretch to be a big shaky sailing day.  However, this time around we had one of our most fantastic, pleasant, beam-reaching days ever. We arrived in English Harbour, Nelson’s old stomping ground and very well preserved as such, in the mid-afternoon.

That night was the full-moon party. We participated, making the most of the local rum and hospitality of the locals. This time of year the place was wonderfully quiet yet all knew to meet at one restaurant.  A great evening. 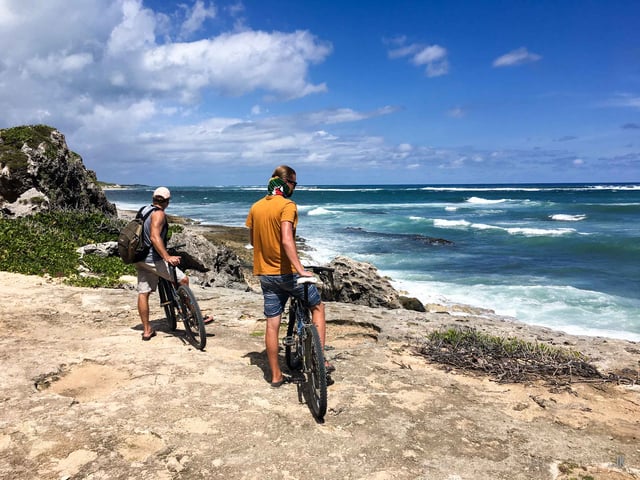 The island of Barbuda may be the least-visited island in the whole of the eastern Caribbean. It sits a day sail above Antigua. We were very keen to explore the pink-sand beaches and frigate-bird colonies. The navigation around the island is not for the faint-hearted.  With coral reefs, sand banks and a strange assortment of bays, this was a fantastic day for 106 Advanced Coastal candidates.  We were able to rent bicycles, explore Two Foot Bay on the northern side and have a swim in the completely deserted beach there. Barbuda with its incredible water, pink sand beaches and unaffected, friendly locals is well worth visiting if you get the chance.

Turning west for the first time this voyage, we left Barbuda at night for an evening sail to the well-known island of St Barthelemy, aka St Barths. This island is always a joy to visit, whether it's in the high season where billionaires and their 550’ yachts come to celebrate New Year, or this “shoulder season” time of the year, where it’s more a locals-only affair. The town of Gustavia is friendly and immaculate. We arrived at 6 am and after checking into Customs went straight to the bakery to pick up some still-warm croissants.  What a way to start the day. 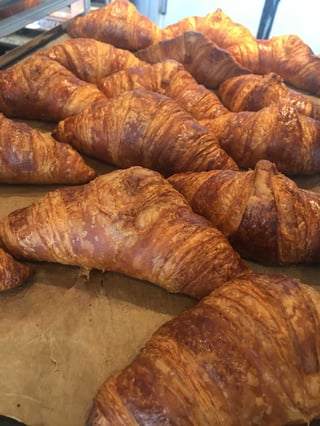 The following day we headed to St Martin, sailing around the northern tip of the island to Anse Marcel, a little very well-protected bay and went to Bistrot Caraibes, your writer’s favourite restaurant in the entire Caribbean.  Served by the two brothers who also own the restaurant, we were treated to local freshly caught fish prepared in three different ways. Each was unique, interesting and most importantly for fish, not overbearing. Amazing.

We spent another day in St Martin catching up with some sailing friends and making a few repairs (with an incredibly good Dutch mechanic called Jeff - in case you find yourself stuck in St Martin, ask us, and we’ll pass his details). The following morning we began the fifteen-hour downwind sail to the Virgin Islands. We arrived on the south coast of St John late that evening after having caught a beautiful yellowfin earlier in the day. In fact, we had made a loaf of bread on board, so dinner was lightly seared very fresh tuna on two slices of still-warm bread, straight from the oven. A heavenly finish to a great adventure.

If you’d like to know more about this and future adventures, drop us a line. The adventures double up as advanced sailing courses so participants can earn their skipper qualifications as they experience all this. From time to time there is some real oceanic sailing conditions! So we look for fit, healthy people with great adventurous attitudes.  Sailing Virgins runs a down-island adventure (Virgin Islands to Martinique to Grenada) every July and an up-island adventure (Grenada to Martinique to Virgin Islands) every October.

From November to July in the Virgin Islands we run week-long fasttrack sailing programs, taking students to bareboat skipper level.

Click here to see more about the bareboat skipper course and here to check the calendar showing when courses are held.

Why Is France's Bay of Biscay So Badass?

Feared but respected among sailors, the Bay of Biscay (also called Valley of Death) has been the...

Catching your own fish while sailing is a passion of many a sailor. Many of the most popular...

Eight Apps Every Sailor Should Have

Are you looking for some apps to help you with your sailing? Here we list...